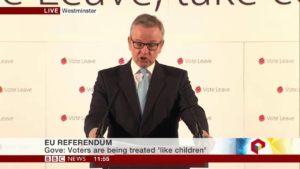 The opening of the official campaign on the EU referendum hasn’t been all fireworks; instead, it’s been mostly more of the same. Each side trading consequences and perils, questioning the other side’s competence or intent. In particular, we’ve been lacking vision.

The vision thing is an easy one of trash: too many overtones of Tony Blair, too much of a hostage to fortune. But vision matters: when no one seems to agree about the state we’re in, speaking instead of the state we might achieve looks less problematic.

This is particularly true for Leave. Saying that the status quo isn’t good will only get you so far, whereas a vision of the brighter, better future might well draw in more people. As Sunder Katwala noted some time ago, without that positive construct, Leave lacks a focus to its energies. While that might be a painful process, the potential value of a pre-agreed plan to a Leave side that won the vote would be immense, not least in the Article 50 negotiations that followed.

Again, the problems here are legion. Leave covers a huge array of ideological and party political positions that barely agree on what’s wrong with the EU, let alone what’s to be done. Any attempt to push a plan is thus likely to meet with internal resistance, since it will implicitly favour one worldview or another. As such, it might push away as many as it attracts.

All of which makes Michael Gove’s speech this week all the more interesting.

Gove is one of the more thoughtful figures in the Leave camp, in the sense of working through the implications of different decisions and being grounded in the politics of the situation. However, on this occasion, that thoughtfulness seems to have led him to a strange destination (thanks to whoever on Twitter reminded me of this on the confusion of opinion and action).

Gove’s argument is that the UK will be able to move out of the EU’s control but still maintain full access to its markets. He talks of a free trade area stretching across the European continent, which the UK – by virtue of its size and importance – could almost not help be part of. Moreover, the sheer success of the UK in this new position would start a contagion of democracy and would presage the collapse of the EU itself.

This ‘Goveland‘  obviously suffers a number of problems, as commentators (and Remain) were all too happy to point out. Yes, the UK is a large market for the EU, but not nearly as large as the EU market is to the UK. Coupled to the lack of incentive for other member states to give a generous deal to the UK – which would only raise further demands from domestic eurosceptics – and this ‘Albanian model’ looks not only less appealing but also less likely. Finally, as Pawel Swidlicki rightly pointed out, how could the UK negotiate access to an EU that was falling apart?

If the mechanics of the proposal are dubious, then the politics is less so. This speech has been one of the few big moments so far in the debate, where someone has tried to move things on. The absence of a clear leader of Leave means that there is opportunity for Gove to take up the reins, which might serve him well in the future, whatever the outcome. In addition, Gove’s proposal is open enough/lacking enough detail that it could act as an umbrella for many Leavers, at least in the broadest terms.

Gove’s speech matters not for its plan, but for its projection of a strong, independent and confident Britain. It taps into many of the themes that Leave have pushed over recent months, about not doing down the UK and about holding up our heads. For many voters that might be enough to convince them that Leave is the ‘right thing to do’, and we’ll work out the details as we go.

However, this doesn’t happen in a vacuum. There has been something of a swing towards Remain in the past week or so, which might be down to the government leaflet, or to the numerous statements about economic uncertainty caused by the potential of Brexit. While Remain has even less of a vision of the future than Leave – essentially, they’re relying on “it’ll be like it is now” – that doesn’t hurt them in the same way. Thus it falls to Leave to make their case stick better in the coming weeks.