As we noted last week, there has been something of a mismatch between referendum campaigning and public engagement. Certainly, we continue to see only the low levels of growth in Twitter followers of recent weeks, even as groups have ramped up their production of content. 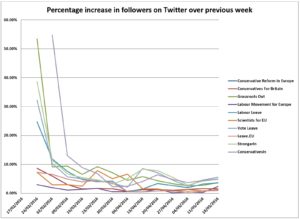 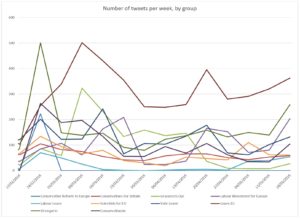 While this looks like a rather static environment, it is important to note that the drift away from positive campaigning in the Leave camp has firmed up into a much clearer trend. 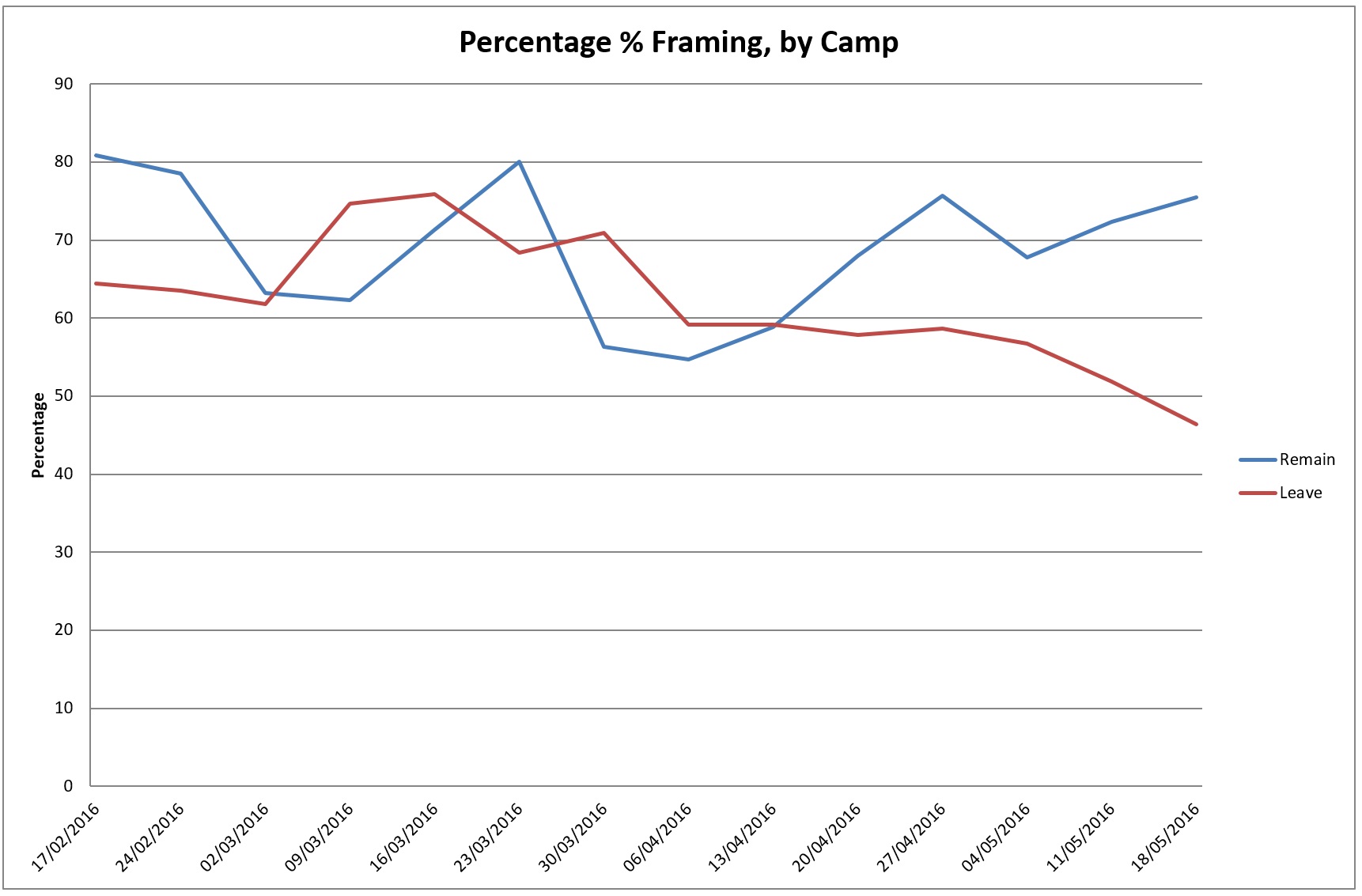 However, this headline trend masks key differences within groups. For instance, both of the main Leave groups have increased the percentage of positive tweets of late. At the same time, Leave.EU seems to have moved to making more negative comments about their opponents (as opposed to negative arguments about the EU and British membership), focusing much attention on questioning the reliability and impartiality of anti-Brexiteers, such as the IMF or Jeremy Corbyn. 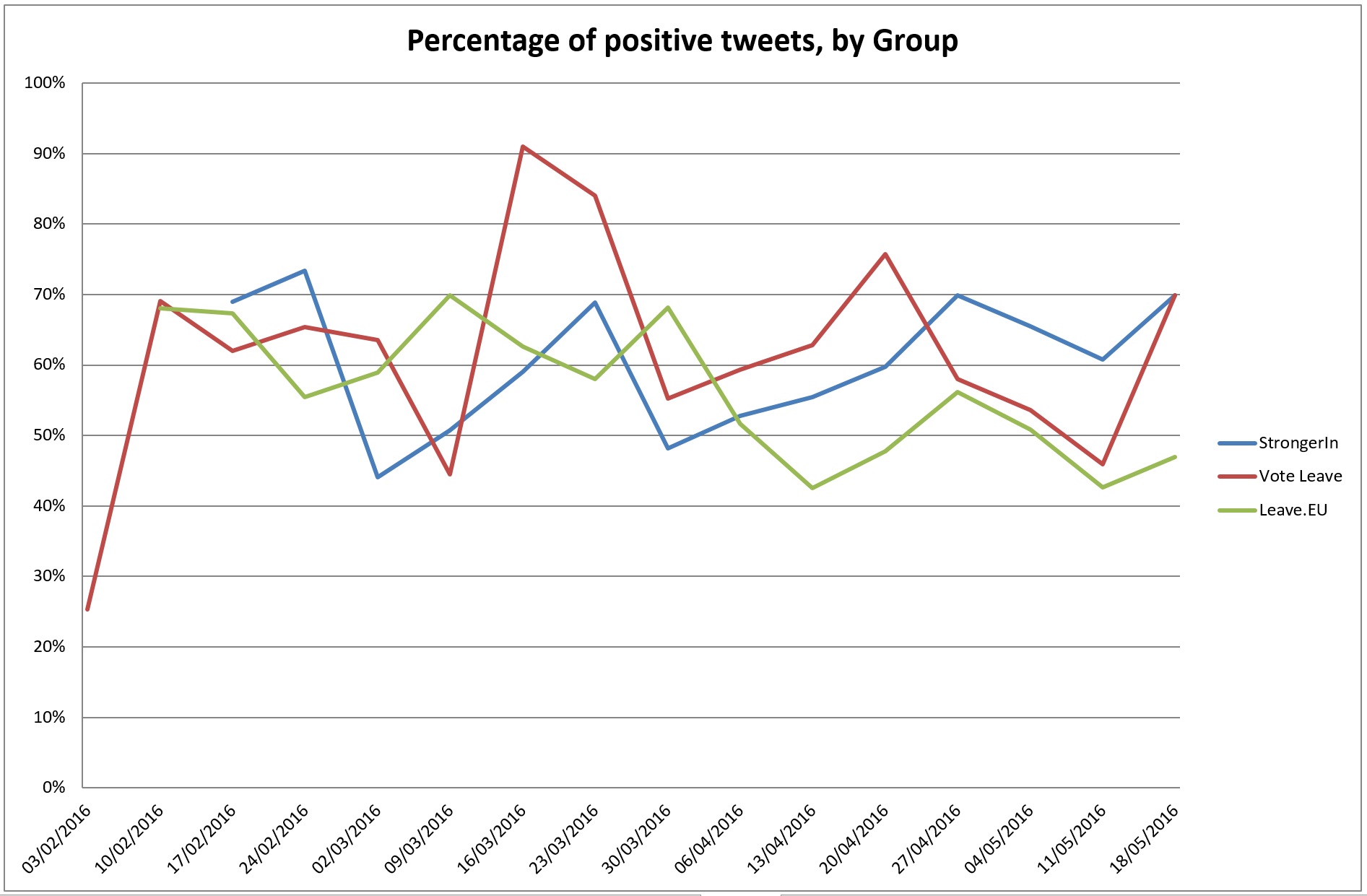 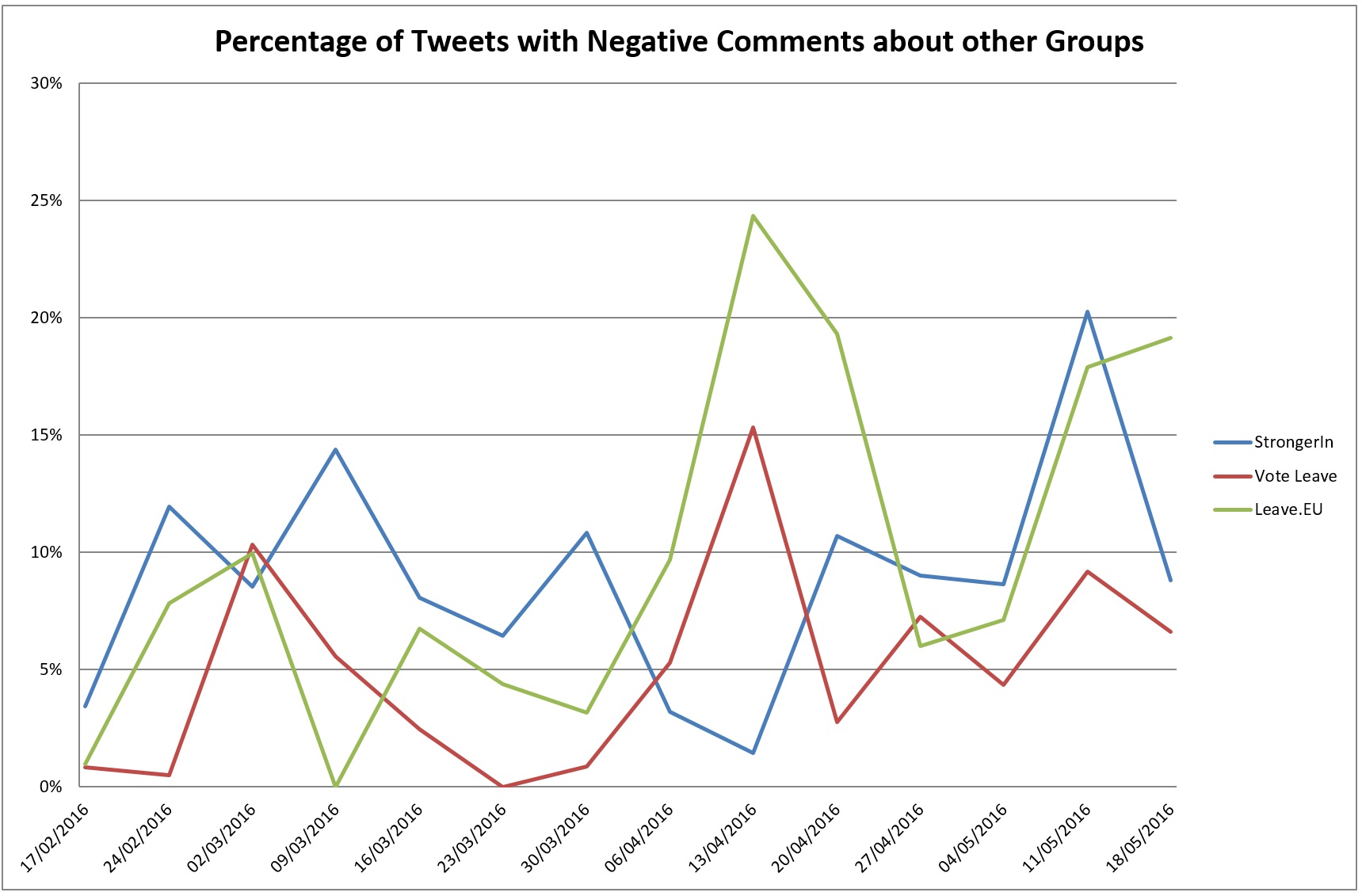 So far in our briefings, we have focused on content. However, it is also useful to consider a very different aspect of social media campaigning, namely timing.

Social media face in different directions. On the one hand, they are an unmediated channel of communication and interaction with the general public, so there is clear value in timing to fit around peak usage times, especially with a medium like Twitter, where content very quickly disappears from sight. On the other hand, the reactiveness of Twitter makes it ideal for instant rebuttal of content from other sources, both online and in ‘old’ media. And on a third hand, Twitter also offers an opportunity to shape old media news agendas, by pushing content and arguments in a timely fashion.

We’re interested in the extent to which each of these dynamics shapes timing for groups. Thus we have taken timecodes for all the of corpus of data that has built up since late January (c.16000 tweets) and mapped them to times during the week. The chart below gives an overview of relative volume of tweets by hour of the week, for all ten groups in our main sample, plus the two official groups – Stronger In and Vote Leave – and Leave.EU, these being the most consequential in terms of followers and activity. 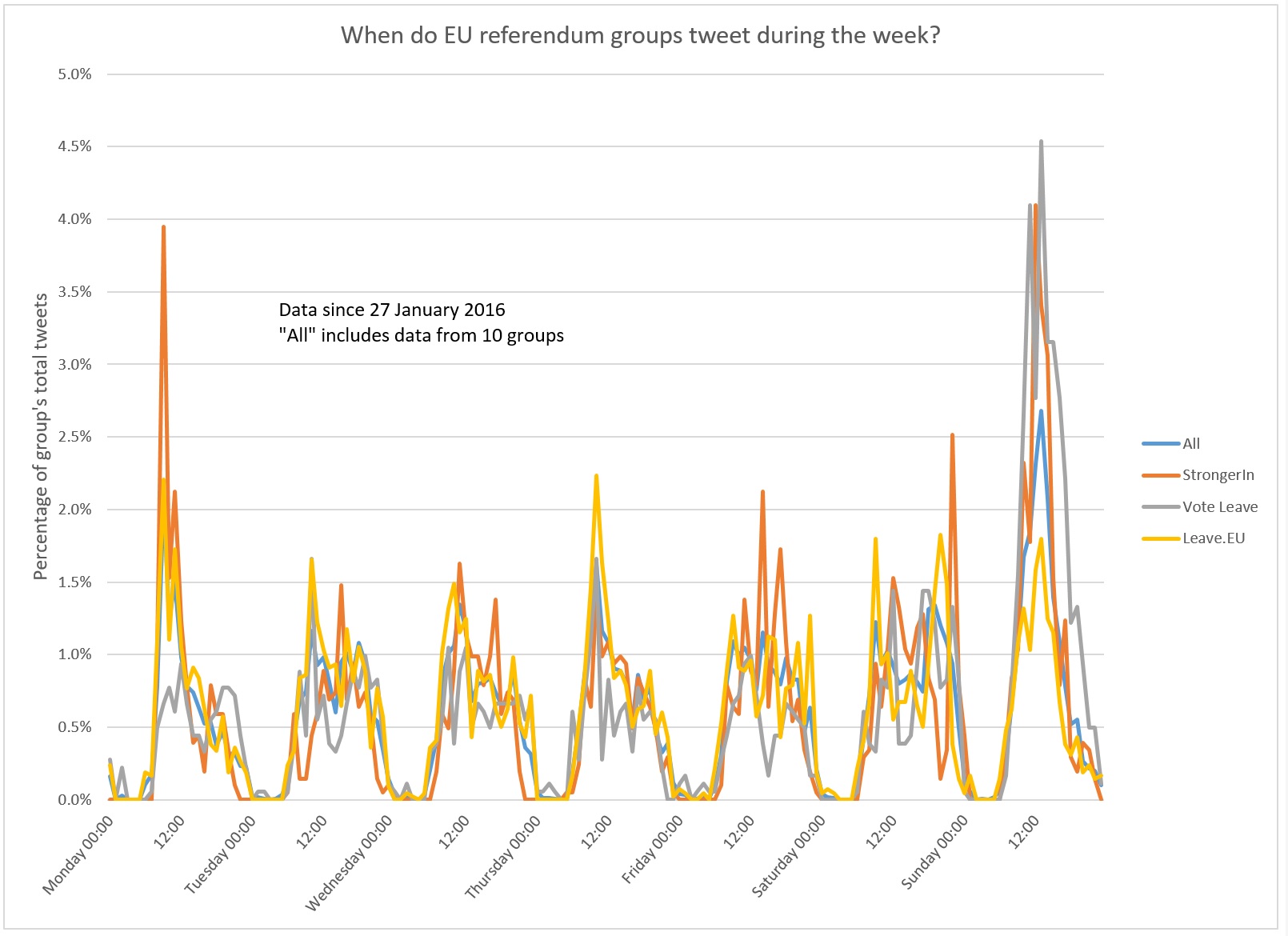 Already at this higher level of analysis some key points can be noted. Firstly, there is generally more activity at weekends than weekdays, especially on Sunday. Secondly, Monday also has a particularly large peak of activity in the morning. Thirdly, daily cycles appear generally consistent, with a morning peak and then a trailing off during the day. Finally, overnight activity is almost non-existent. The charts below present these points in more accessible form. 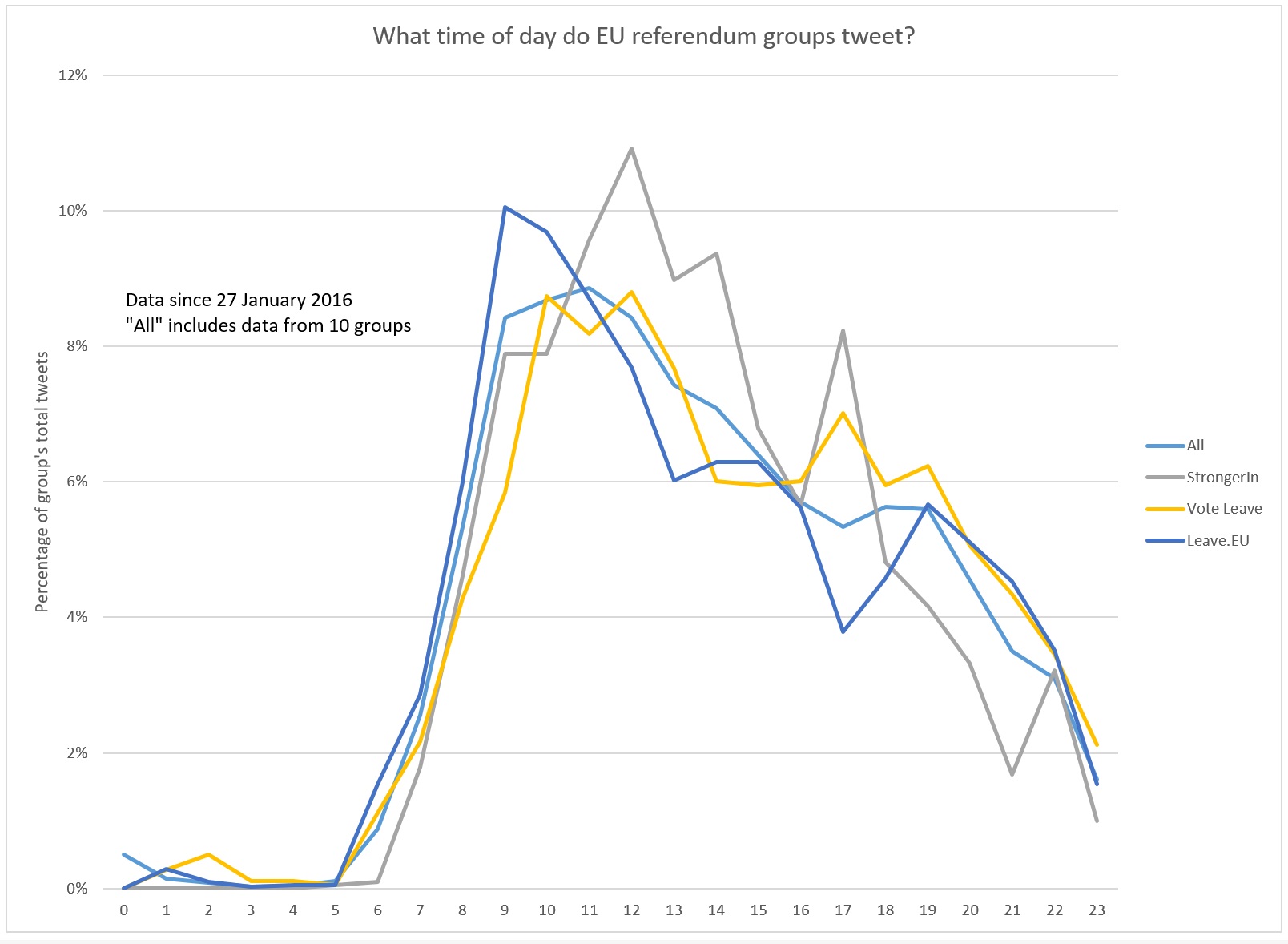 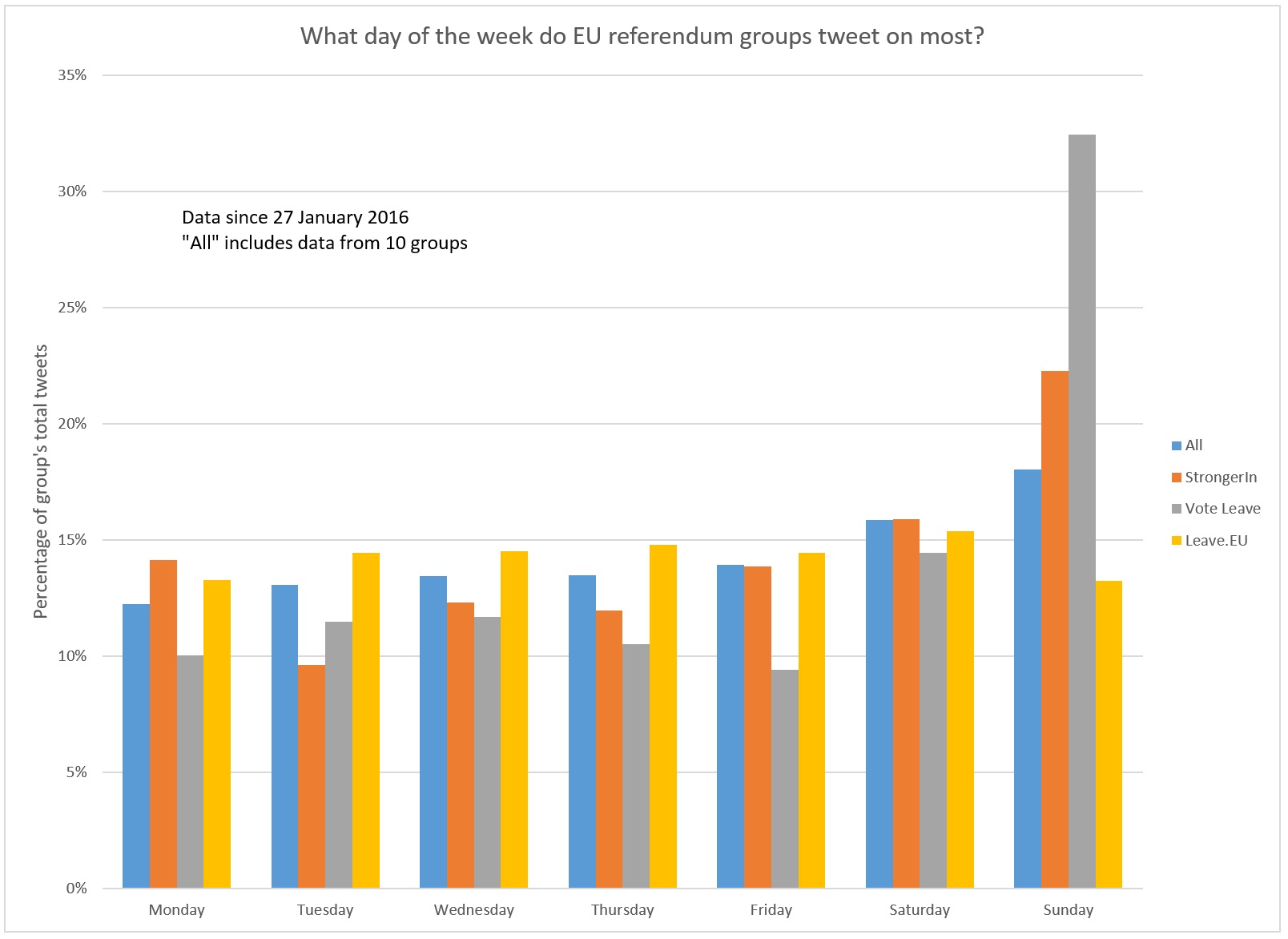 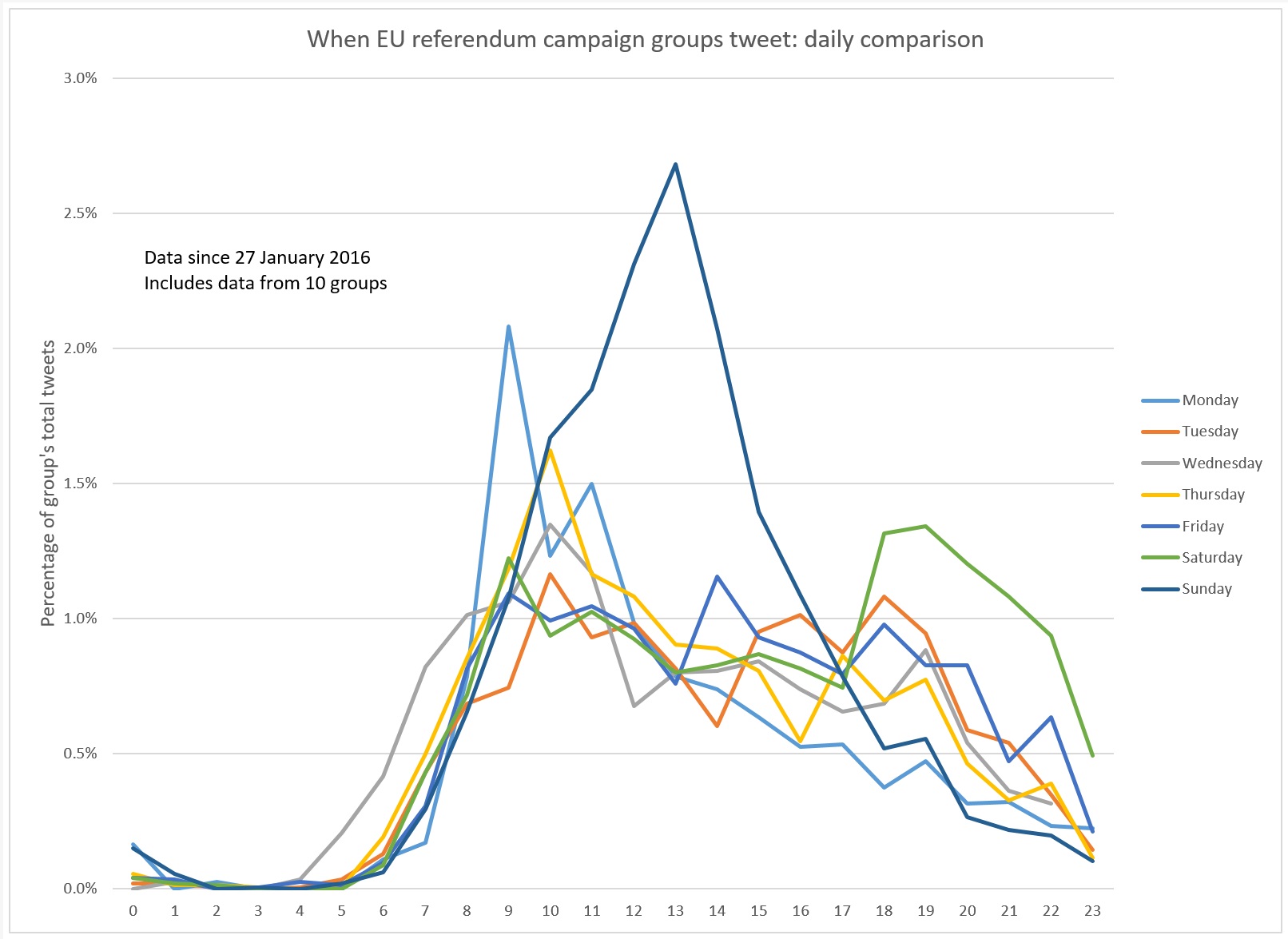 It’s of note that this hourly profile in the last chart, maps very well to available data on overall time posting on Twitter (see here, for some examples).

If we take the mean of the correlations between day combinations, then we see that weekend days are least similar in their timing profile (with their peaks typically coming later in the day), with Monday holding an intermediate position (due to the relative size of its early morning peak). 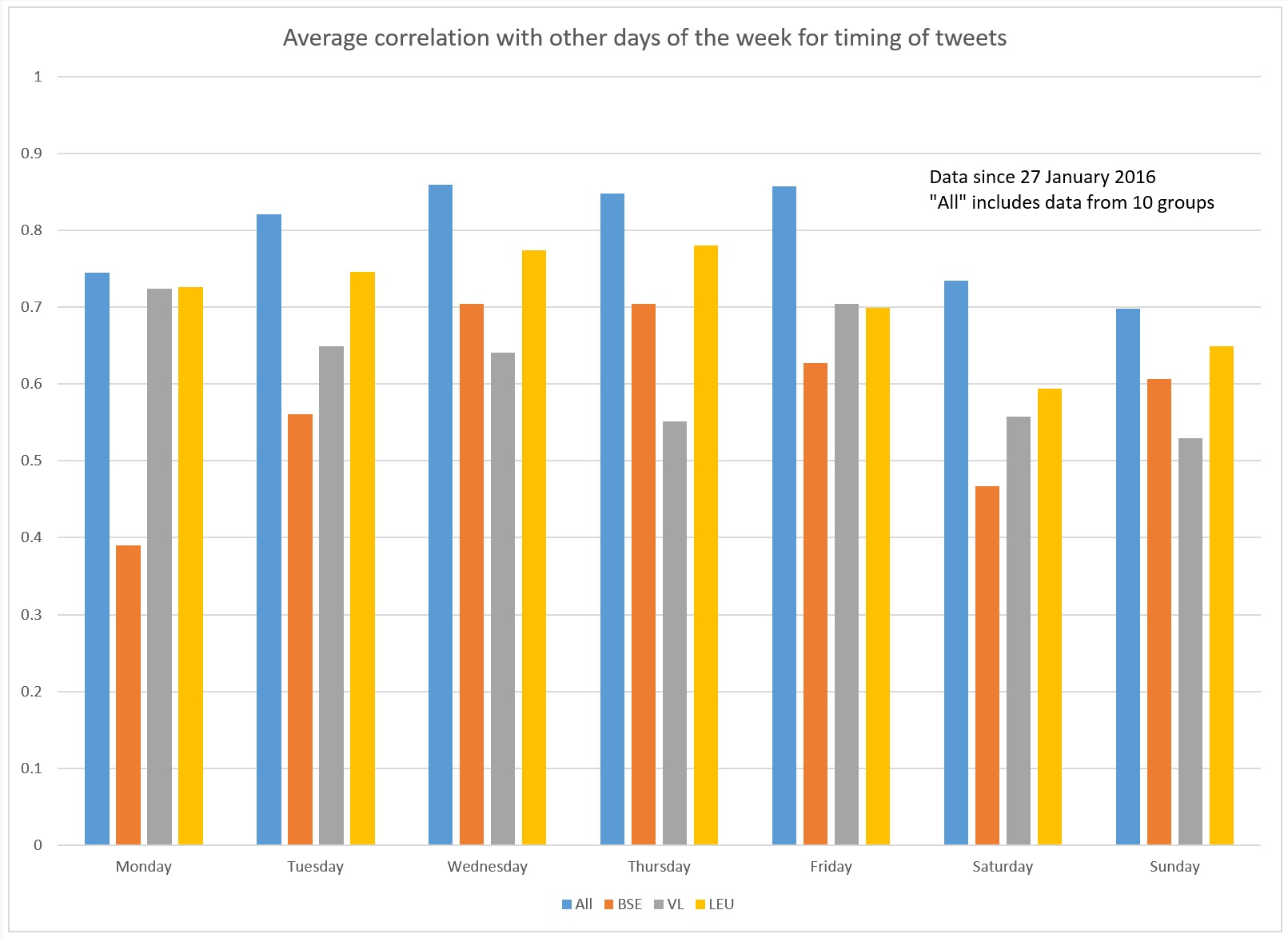 However, it is also evident that each of the three main groups pursues somewhat different strategies within this. As the charts below highlight, Stronger In has an unusual timing profile, with big peaks on Sunday lunchtime, Monday morning and Saturday evening. By contrast, Vote Leave is highly active during Sunday, with a secondary peak from Saturday afternoon into evening. Finally, Leave.EU has a very distributed set of peak activities, including every morning, Sunday lunchtime and several evenings.

These differences reflect the targeting of different audiences. The morning peak comes from many users looking for information to shape their day, leading to the production of content seeking to frame agendas and impressions. The weekend’s raised activity is a mixture of mobilisation and support work for campaigners (who are most active at this stage of the week), as well as trying to frame and then react to Sunday morning TV politics shows and newspapers, which have increasingly been seen as important for setting news agendas for the coming week. 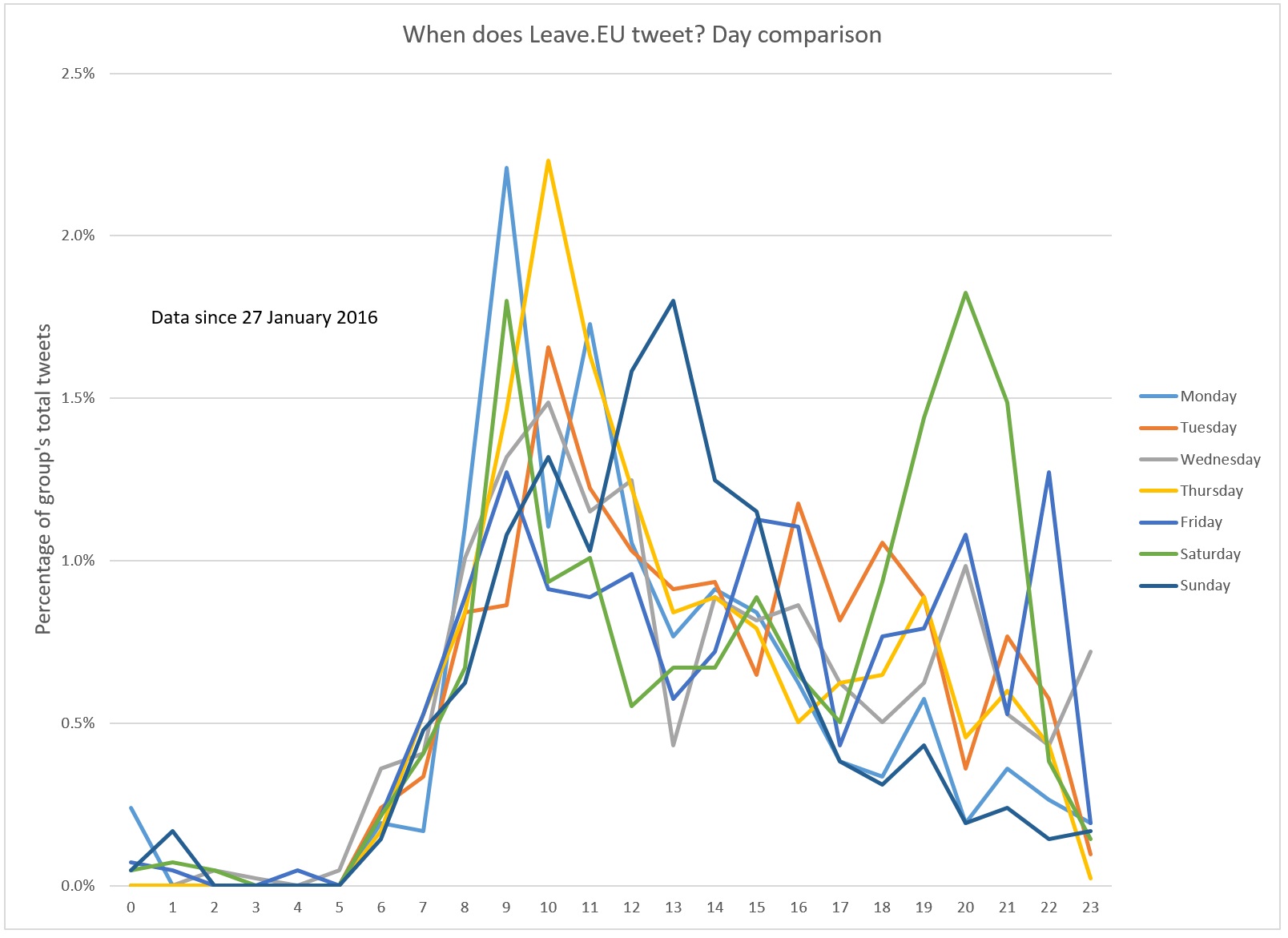 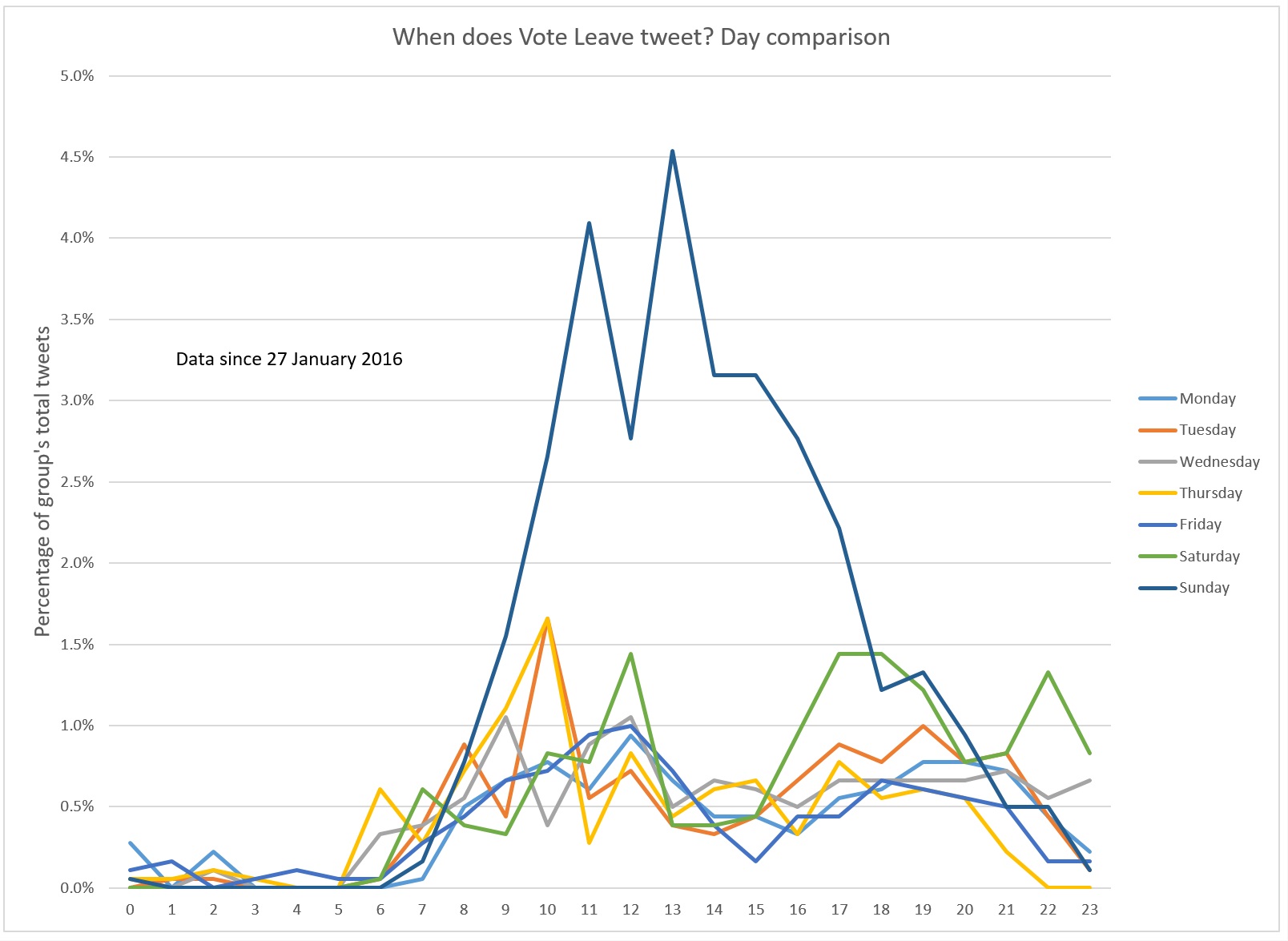 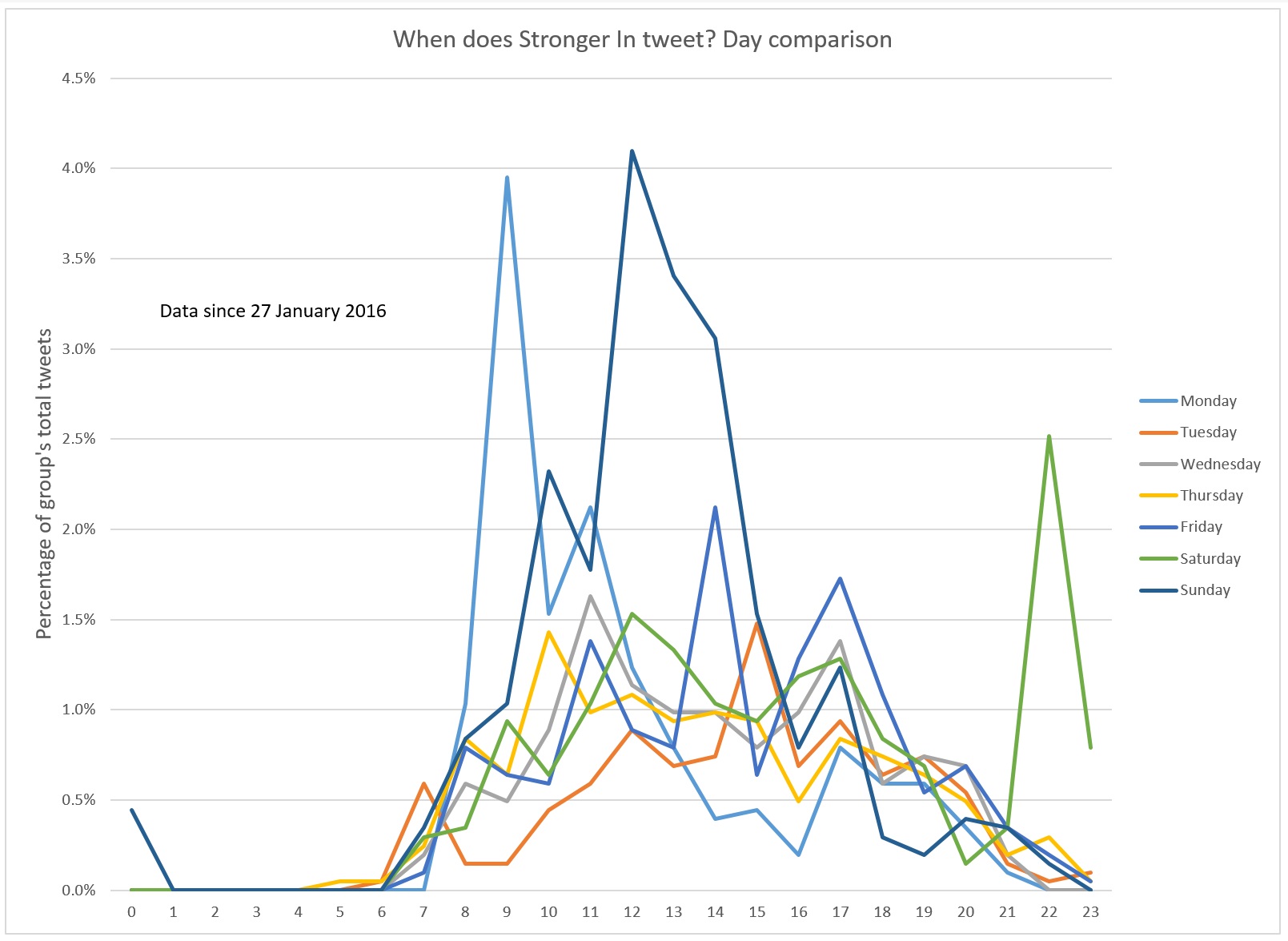 While this traffic data gives some initial insights into the practice and differences between groups, we are now working to match this up with our other coding, to see how various themes are more or less common during the week, which would cast further light on whether our description in the previous paragraph stands up in practice. As a preliminary finding, you can see that ‘campaign’ tweets fall disproportionately on the weekend when we look at our smaller sample drawn from various groups, supporting the hypothesis that this likes to supporters. 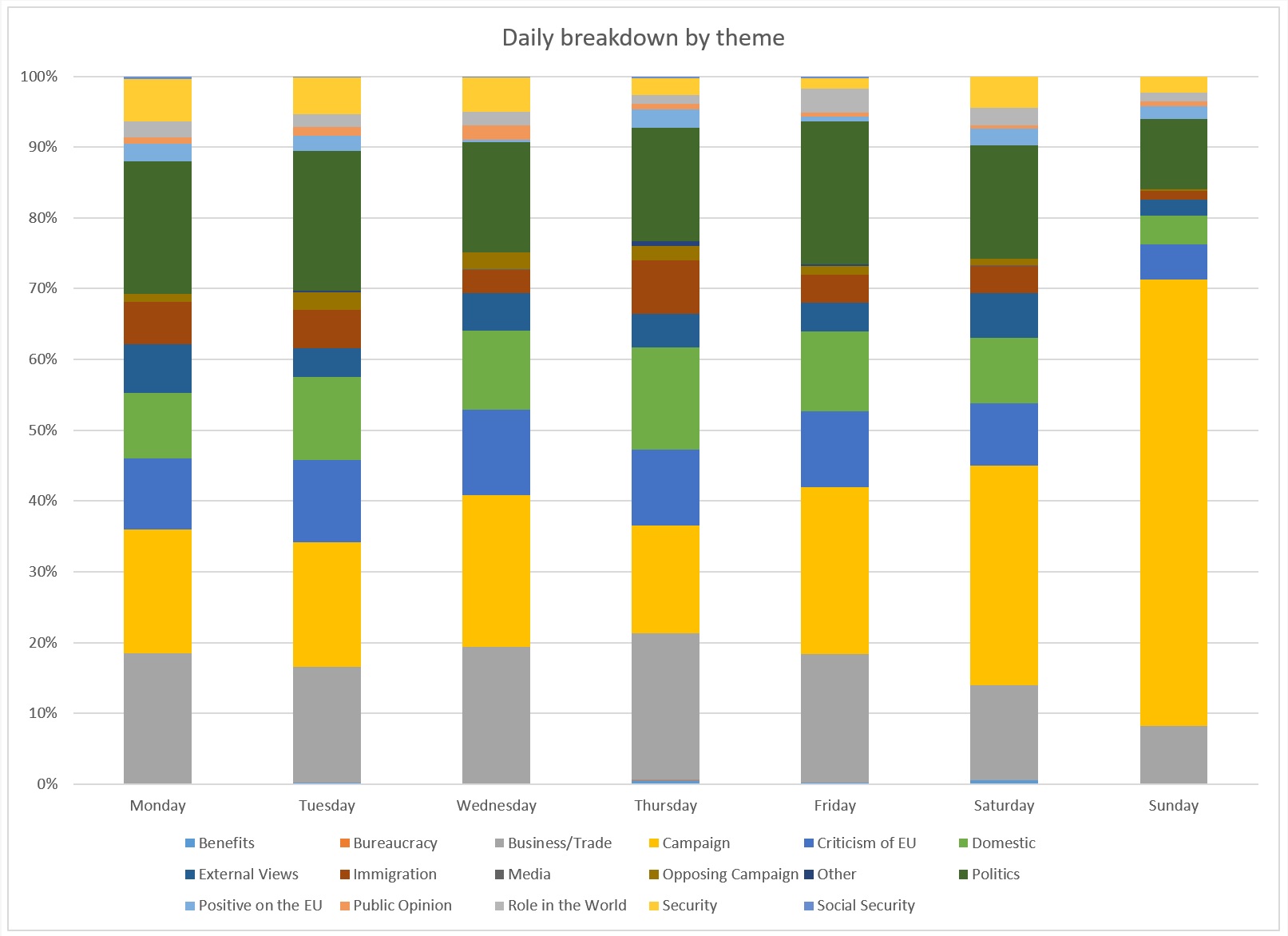 This week, Vote Leave’s feed was nearly completely dominated by 1) campaign related tweets, the next most tweeted about topics were 2) criticism of the EU and 3) domestic issues. The focus on campaign tweets was replicated in Stronger In’s twitter feed. In fact, the charts of the two opposing campaigns’ twitter themes this week look remarkably similar. Stronger In did, however, focus next on tweetes related to 2) business/trade/economy and then the 3) other campaign. In contrast, Vote Leave dedicated relatively few tweets to engaging the other campaigns. Nevertheless, this could suggest a pattern emerging in the way in which the two officially designated campaigns approach social media.

Leave EU Official had the largest volume of tweets (by 104 tweets) and their twitter feed looks completely different from the two official campaigns with a much more event spread across themes. Their top theme was 1) criticism of EU, followed closely by 2) campaign related tweets and 3) politics. 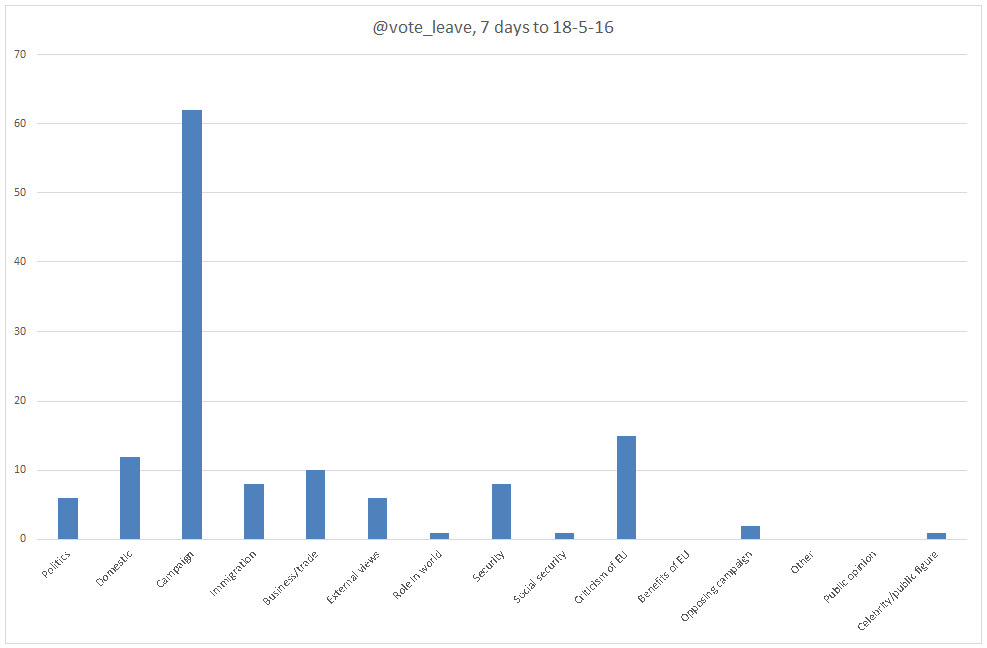 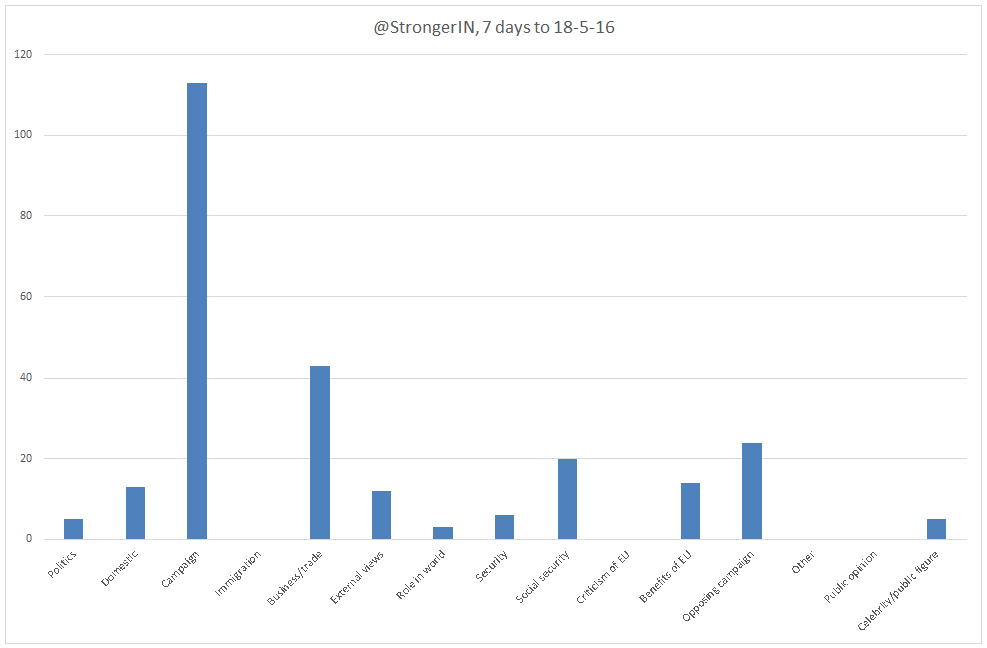 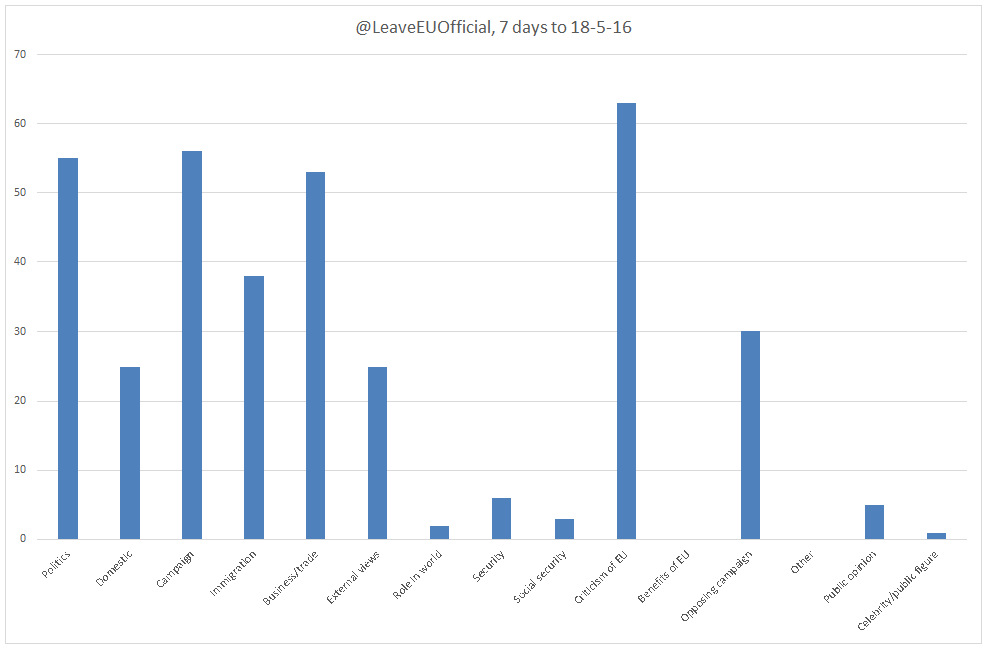