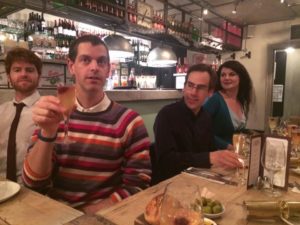 It started out so well…

So last night was the Politics Department Christmas meal. Suffice to say that I’m the only one in so far, possibly because I had my first Article 50-themed dream – Lord Pannick was doing donuts a la Boris, while David Davis was giving evidence to a Parliamentary Committee – and felt that sleep was no longer a good idea.

And yes, drinking was involved. And karaoke.

Anyhoo, I tell you this not simply to stress what a good bunch of colleagues I have but because my dream reminded me of a thought I’d had yesterday while watching the actual David Davis give actual evidence.

As various people have noted, there is a shift going on in government of late; namely that the campaigning mode of bright aspiration is now being tempered by some sense of what is actually possible/likely to happen. In Jolyon Maugham’s lovely phrase “the bare swinging lightbulb of reality” has cast its unrelenting beam on Brexit, with all the uncomfortable consequences that I currently have no trouble imagining.

As I argued recently, this might be partly a matter of positioning, of politicians softening the effect of Brexit by progressive reshaping of debate and attitudes.

However, to read reports of Cabinet discussions, it’s also evident that there’s also a big pile of self-delusion and ignorance still going on and that any modification of rhetoric or objective is due to Maugham’s lightbulb.

Seen in this light, Davis’ comments that the UK’s plan won’t be ready until February must be read as that time being needed for everyone to come to a more informed understanding about such basics as access to the internal market, free movement, transition deals and budgetary contributions.

Part of this is also a growing understanding of the complexities of the EU27 side of the negotiation. At the event I co-organised on Monday with the CER, we had a great debate (that you can listen to here) about the view from Berlin, Paris, the Visegrad Four and beyond on Article 50.

Importantly, all the speakers stressed that while everyone is committed to maintaining the EU, all are also deeply interested in their domestic agendas and in making the most of the UK’s situation for their own benefit. That translates in some diverse priorities, be that keeping links with the UK (for Germany), preserving security cooperation (for France and the CEECs), defending market liberalisation (for the Dutch) or changing the EU’s future path (for everyone). Today’s European Council might resolve procedure on Article 50, but it’s unlikely to reach full agreement on what it contains.

In short, what we’re seeing here is the start of the more serious end of the shift from referendum to negotiation. To put it differently, there is more of a sense that this is not a movie so much as a big lever-arch file of detailed notes: there will not be Lord Pannick doing stunts, but rather long, complex and hard-to-resolve negotiations on many fine points of law and technicality.

This is the phase in which scrutiny will matter all the more, whatever one’s interest or view of Brexit. Where the government has been pretty consistent is in wanting to negotiate away from the prying eyes of Parliament and the media and as public interest drifts away the pressure to be open will likely drop off too. From a democratic perspective, and for anyone who’s worried about backsliding, this isn’t a good situation, but also suggests that the window of opportunity to open things up is closing down.

Christmas might traditionally be a time of rest, but this year it’s going to be very busy, as everyone tries to get their houses in order for the coming of Article 50 notification. As has been the case since 24 June, the sooner you get out there, the sooner you can set the agenda.

And now for a cup of something soothing.

On cycles, agency and power