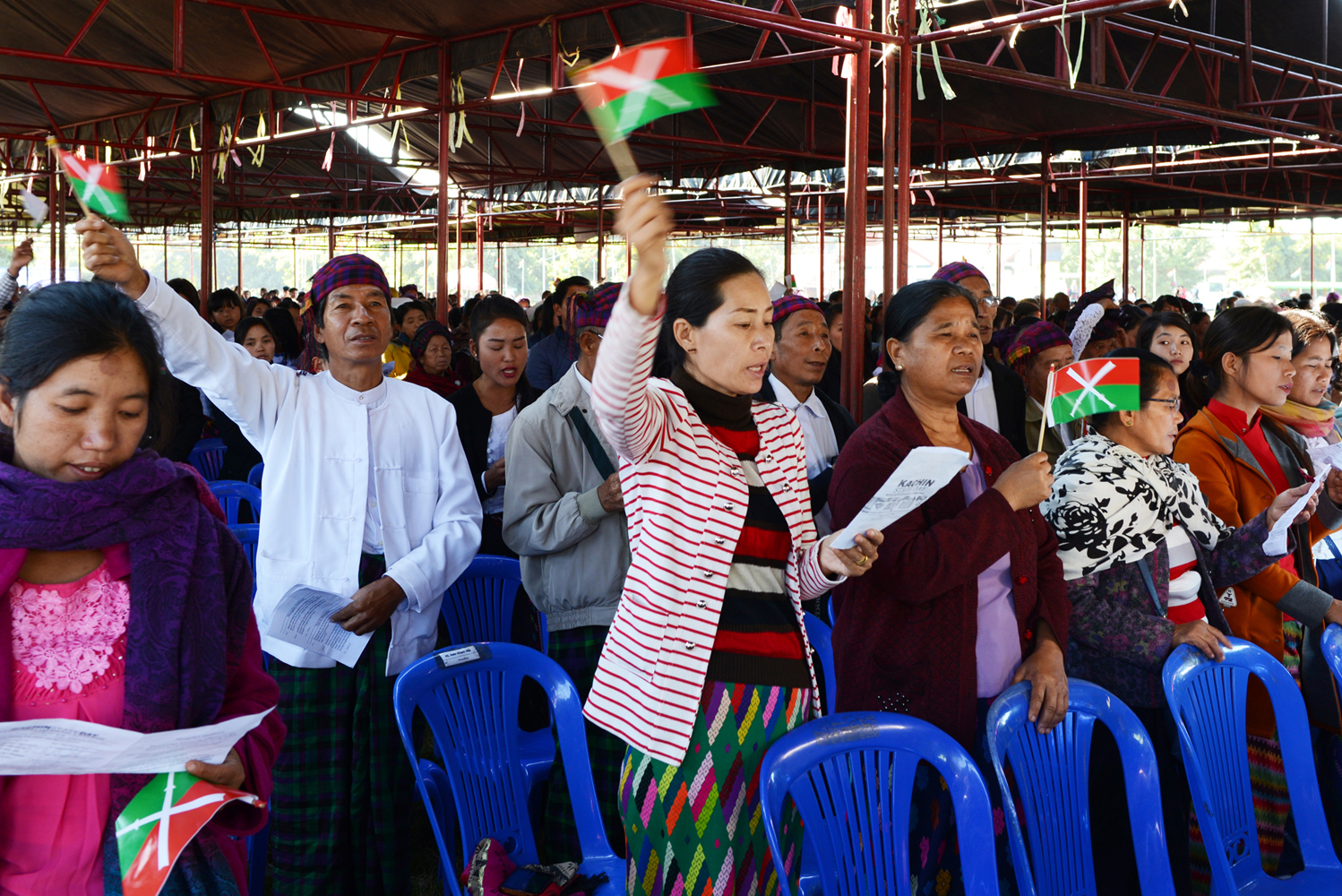 In May 2017, Myanmar leader Aung San Suu Kyi invited representatives from across her deeply divided nation to a new round of peace talks. About 1400 delegates from government, parliament, military, political parties, civil society and ethnic armed organisations (EAOs) attended the meeting that covered political, social, economic, military and environmental issues. Unsurprisingly, a binding agreement on the most fundamental issue, the nature of federal power-sharing mechanisms between the country’s ethnic groups, remained elusive.

The most controversial negotiation point at the meeting was the issue of “non-secessionism”. Fearing the disintegration of Myanmar, government officials insisted on inserting the term in any final agreement. Representatives of most EAOs indeed officially reject secessionist aims and commit to finding a negotiated federal settlement. Against the background of a decades-long civil war, however, many feel that the option of self-determination should be retained as a matter of last resort.

Importantly, the negotiation positions of EAO leaders cannot be understood in isolation from wider societal trends. This is because many of Myanmar’s ethnic insurgencies are strongly dependent on local support among ethnic minority communities. In fact, the organisations are inextricable parts of larger ethnonational projects. While some EAO leaders have demonstrated considerable willingness to compromise with the government, the perspective of their movement’s grassroots has often become more intransigent.

In the country’s war-torn northern Kachin State, for instance, civilians have lost faith in Aung San Suu Kyi’s ability and sincerity to negotiate a peaceful settlement and increasingly call for independence. For years, most of Myanmar’s ethnic minorities, including the Kachin, have put their faith in Aung San Suu Kyi to reconcile the country. Her landslide victory in the country’s historic 2015 elections, was not least secured through the support from ethnic minority voters. As armed conflict has continued and even intensified since Aung San Suu Kyi’s rose to power, many of these erstwhile supporters feel betrayed.

They articulated this clearly at this year’s Kachin State Day on January 11th, five days after Myanmar celebrated its 69th anniversary of independence from British colonial rule. About 5,000 Kachin gathered in the ritual Manau Park of Myitkyina, the provincial capital of Kachin State where war between the Kachin Independence Organisation (KIO) and Myanmar’s government has broken out again since a 17 years-long ceasefire collapsed in 2011. The conflict has escalated particularly since the government military started large-scale offensives in August 2016.

The site featured two parallel events. While the official NLD festivities lay deserted, young and old flocked to an unofficial alternative stage, organised by student groups, activists and local churches (most Kachin are Christians). Throughout the morning, youth groups were dancing and singing to revolutionary tunes. Actors of a local theatre group dressed in KIO uniforms revisited the history of the Kachin rebellion and their struggle against Myanmar’s central government that has lasted for 55 years. The scene was covered in a sea of red and green flags, featuring two crossed swords, an insignia traditionally associated with the KIO.

Most remarkable were the passionate speeches given by local politicians, activists and pastors. Not only were they calling on the NLD to stop the escalating war in Kachin and neighbouring northern Shan States. Many demanded full-fledged independence of Kachin State from Myanmar to the cheering of the crowd. One year ago, most Kachin still rallied behind the slogan “Awng dang!”, which literally means “towards victory”. Kachin normally use it to express their desire for greater autonomy rights within a federal union, which is the officially stated aim of the KIO. Today, many Kachin prefer the expression “Awng dawm!”. The latter means “towards independence” and leaves much less space for negotiation.

To understand why Kachin society has lost trust in Aung Sun Suu Kyi’s peace process one year after voting for her, it is important to appreciate that the situation in Kachin State has not improved since her government took power. Far from it, Myanmar’s military – the Tatmadaw – has expanded its campaign against positions of the KIO and its various allies since August 2016. At the same time, an alliance of ethnic rebel groups, which includes the KIO, Kokang and Palaung movements, has taken more offensive action as well. Most Kachin rebel units however remain dug into defensive positions around pockets of territory controlled by the KIO. This gives them a strategic advantage in fending off infantry operations. Yet, they stand little chance against the Tatmadaw’s increasing reliance on air power and artillery.

The escalation of war has not only resulted in heavy casualties on both sides. It has also deteriorated the humanitarian situation of the several thousand civilians trapped in the fighting. The plight of internally displaced people (IDPs) in the conflict zone has additionally worsened since the military has blocked aid deliveries by international and local agencies. Today, relief supplies are at a literal standstill, leaving IDPs to fend for themselves in impossible conditions. This situation has made it difficult for many Kachin and other ethnic minorities to believe in the ongoing peace negotiations.

Interestingly, EAO leaders might actually be more willing to compromise than their civilian counterparts in Myanmar’s ethnic borderlands. One Kachin youth leader expressed this as follows: “Even in the KIO many generals want the peace process… But for us, we need ‘Awng dawm!’” The criticism many Kachin are expressing with regard to Aung San Suu Kyi is not only the escalation of fighting. In fact, they understand that her government can only exercise limited control over the country’s generals. More distressing to them is her silence, which makes them feel betrayed after they have helped her come to power as well as what they view as an embracement of the Tatmadaw. For many Kachin, the last straw was when she praised the “valiant effort of the Tatmadaw and security forces” for their combat against the KIO-led rebel alliance in Northern Shan State. According to a KIO officer, the ever growing demands for independence by force of arms among the Kachin “street” indeed complicate the movement’s ability to negotiate a federal settlement with the government.

A similar disconnect between compromising rebel leaders and less conciliatory grassroots can be observed in EAOs across Myanmar, including the country’s oldest ethnic insurgency: the Karen National Union (KNU). While a ceasefire between the latter and the government has ended decades of war at the Thai-Myanmar border, many local Karen face new sources of impoverishment and insecurity, including investment induced-displacement and militarisation. In order to solve recent impasses on the negotiation tables in Naypyidaw, it is thus not enough for Aung San Suu Kyi to reach out to EAO leaders. Similarly important it seems is to rebuild broken trust among local minority communities in her government’s willingness and ability to address their long-standing and genuine grievances.

This post originally appeared as part of the T.note series of analysis papers published by the Torino World Affairs Institute (TWAI), and is reposted with permission.

A tentative model of the EU27’s approach to Brexit

The weak/strong paradox of Brexit