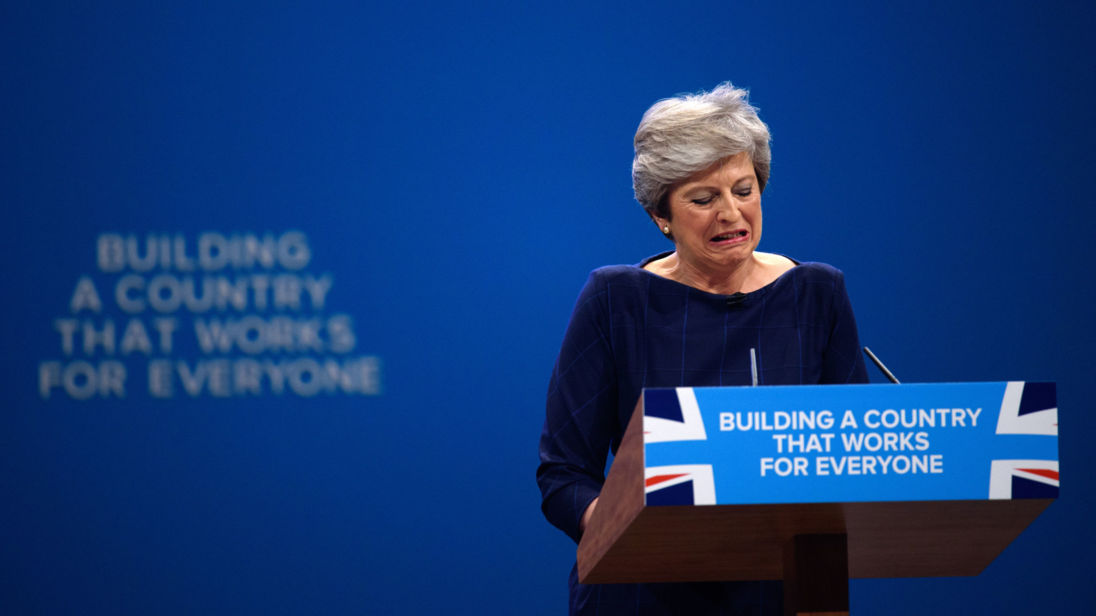 There’s nothing very useful to be to added to the general cacophony around Theresa May’s speech to her party conference yesterday: the jokes have all been made, the judgments handed in.

But one aspect that’s been relatively overlooked is the impact on Brexit: as discussion continues to swirl about, could it improve things to have her out of office?

The case in support of this looks pretty solid. Her authority, her policy and her communication are all severely lacking.

Firstly, her position within the party is severely compromised, and has been since the general election this spring. The trashing of her reputation was as swift and brutal as any that has been seen in recent times. The Tories are an unsympathetic lot when it comes to power and May failed the most basic of tests.

The speech appears to have done nothing more than convert some of the contempt into pity, which is not really an improvement, but instead another stage in the party’s rejection. It opens up the line of argument that she is tired and needs a break, ‘for her own good’: the attempt to get the party to buckle down on Brexit can now be met with a ‘there, there’.

Secondly, May’s policy line on Brexit remains utterly unclear. To all intents and purposes, we are still at the ‘Brexit means Brexit’ phase: empty rhetoric and incomplete and contradictory positions. The speech contained nothing to change that, a strange omission even if one considers the Florence speech to have been the main place for this: the conference as a whole was full of Brexit-talk, but without the push from the leader that might have mattered.

And this runs into the communication gap. This isn’t a matter of having a cough, but of having a communication strategy that reaches those it needs to reach, with appropriate messages.  To take the obvious example, the stronger response to Boris Johnson’s sniping would have been to re-appropriate the narrative on Brexit and Article 50 and demonstrate leadership on the matter, rather than skulking in the sidelines.

Not really. For as much as May is now damaged goods, there are good reasons to think that she remains the preferable person to be in Number 10.

First and foremost is the time question. As I think I’ve mentioned before, time is very much of the essence now in Article 50: we are now only just over a year away from the time when a deal needs to be finalised with the EU. Having already lost two months to a general election, losing another one or two months to a leadership contest – plus maybe another two to a further general election – looks deeply irresponsible. While there are still some who would happily leave the EU on a ‘no-deal’ basis, they are ever fewer in number, so the desire – which has built up markedly in recent weeks – to get to an agreement points towards making done with the current personnel.

Secondly, there is no one in the Conservative party who looks to have a more settled position on how to handle negotiations. There is a choice between the various shades of softening, and the various shades of hardening, but neither direction is built on a rigorous model and vision. Jacob Rees-Mogg and Boris Johnson might have been the darlings of the conference, but neither had any more to offer than platitudes on the greatness of Britain and how it would all work out in the end.

Even if a new leader did take over, the Conservatives would still have no single-party majority in the Commons, plus a potentially more hostile Opposition, galvanized by the scent of blood in the water: any hardening would also make internal party rebellion more likely.

Finally, and in contrast to the negative reasons for keeping May, there is also a positive in her premiership: the very ambiguity on policy that has hurt her so far. Article 50 is a negotiation and one in the which the UK was always going to have to make some compromises. While it might not have been the optimal way to go about it, May’s rhetoric has at least allowed for adaptions of position over time: consider sequencing, finances, transitions and all the other points she has given way on.

The original May plan was to be bold, but vague, then win a huge majority against Labour, then negotiate whatever deal, and then say “that’s what Brexit meant, and there’s nothing you can do to gainsay it, since you gave me a huge mandate.”

That plan now lies in the dirt, but May probably remains the best person to pursue something similar. Her very weakness means that she can now shoulder the blame as she compromises further.

In short, May has been the author of her own, slow-burning disaster. But that doesn’t mean she is yet to meet her end.