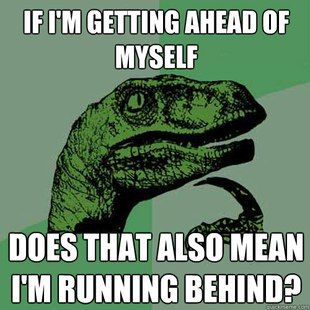 It’s a mark of the quality of the public Brexit debate that the title of this post could refer to pretty much any aspect of the negotiations to date: the mixture of ignorance, indifference and confusion has produced more than its fair share of mistimings and incorrect sequencings.

But today I’d like indulge in my own piece of (partial) mistiming, following a very useful discussion yesterday while giving evidence to the Exiting the EU Committee in Parliament.

The session was focused on the process and practice of ratifying the Withdrawal Agreement, but discussion also strayed into the transition and the movement to the future relationship from that transition.

As all the witnesses underlined, when transition ends (whenever that might be), it ends with a cliff edge, unless an agreement is in place to maintain some form of formal EU-UK cooperation. In that respect, it’s like 29 March 2020, but with the added complication that we currently don’t have a mechanism to extend transition as we can Article 50.

The question that arose was one of how one might square that cliff edge with the difficulty/impossibility (depending on how you feel about it) of concluding a comprehensive future relationship treaty of a kind that’s never been attempted before.

Part of the answer might lie in provisional implementation, which would allow a substantial amount of the contents to be in operation during the (likely lengthy) ratification process. The CETA example gives an indication of how that worked in a potentially-not-dissimilar case.

But that still leaves the complexity of drawing up and signing a single text. As CETA underlined, that single text contains everything and someone in the process might take exception, as Wallonia demonstrated in ratification.

So I’d like to try out some ideas here about how one could break up that single text into multiple ones, to help reduce the cross-linkage that delayed CETA approval and to potentially allow for a more stable move from transition to the end-state future relationship.

The architecture of this multiple-text would be relatively simple, in theory.

At its core would be a framework treaty. This would provide for a general structure of interactions between the EU and UK, including a management/dialogue process as well as a dispute settlement mechanism. Logically, these could be the same as those used in the transition period. In substantive policy terms, you’d also have the maintenance of the transition provisions, but with a mechanism for their suspension as new, sectoral agreements could be reached.

Those sectoral agreement would form the second element, and could be constructed as narrowly or as broadly as required, with negotiation and implementation running at variable speeds.

The merits of this approach would be multiple.

Firstly, it would move transition off the Article 50 basis to the proper one (Arts.207, 217, etc), thus removing a major legal headache for the EU and so providing much more stability for both parties.

Secondly, given the broad acceptance of the transition model to all parties now, the securing of the framework text might be simpler than engaging in to detailed modelling of the end-state future relationship, especially when some parties still aren’t sure what they want that end-state to be.

Thirdly, the framework text would not have to be a complete translation of transition into a new text: if parties could agree within those negotiations that they would end participation in specific areas, then that could already be included, allowing everyone to show that it wasn’t simply a holding exercise. Fisheries and agriculture might be obvious examples of this.

Fourthly, by push substantive changes out to sectoral agreements, it would be possible to avoid progress in one area getting held up by delays in another. So security cooperation could be fast-tracked, while arguments about services continue.

Fifthly, this arrangement would avoid some of the problems of the Swiss model, where multiple treaties were agreed simultaneously and are cross-linked. The EU doesn’t like this, since it’s complex and fiddly. In this proposal, the framework would be the single master document, and could impose conditions on what happens in the case of violation of any sectoral text (e.g. recourse to dispute resolution, or revision to transition provisions). The framework could also create a streamlined ratification process for the sectoral texts, to reduce ratification delays.

But problems would remain.

The central one is the framework document still remains a big and daunting document, and ratification would need to be in place by the end of transition, to ensure it was fully effective. That might be possible, because it’s more about can-kicking than making final decisions on the end-state, but equally that can-kicking might be cause for concern for some parties.

Much would depend on local political conditions around the negotiations. If parties (and particularly the UK) remain at the high level of politicisation on the subject, then the holding pattern that this approach would suggest might not be an option, especially if transition itself had to be extended to allow for ratification to be completed.

However, in the absence of clear consensus about what the end-state should be, thinking about ways to avoid falling off the cliff edge might be of interest.

And this brings us back to getting ahead of ourselves.

All of this clearly depends on an agreement being reached on Article 50 and the Withdrawal Agreement. That said, there are also the active discussions on the Political Declaration, where parties might usefully begin to think about where they’re heading, and how.

Too often in Brexit, decisions have been taken by default or in haste, because we’ve not had the capacity or willingness to raise our eyes from the immediate challenges that surround us.

In those cases, and in this case, that means making less-than-optimal choices. So maybe we can try to change how we do things.