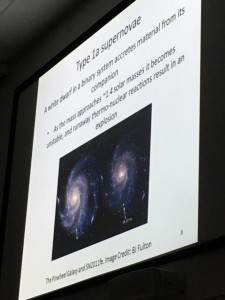 Sorry for the slightly poor photo attached to this post.  I’ll explain why it’s the way it is shortly.  So, last night saw one of the regular evening lectures, open to the public, organised here at Surrey on behalf of the Institute of Physics South Central Branch. The speaker was Dr Clare Burrage from the University of Nottingham, talking about “The Dark Side of the Universe”.  It was a good time to entice Dr Burrage as a speaker.  For one thing, the 2015 Maxwell Medal and Prize was awarded to her for her research into dark energy, and for another, her talk was closely related to Einstein’s General theory of Relativity, which has been celebrating its 100th anniversary in the last few weeks (with various dates being picked according to various criteria, but with agreement that the anniversary is right around now).

Her talk covered the vast amount of the Universe that we don’t understand.  Based on current observations, if one were to take a typical small volume of the universe, the energy contained in the volume would consist of 4% associated with “normal matter” — atoms etc. (with the mass being equivalent to the energy content, through Einstein’s famous E=mc2 relationship), while the rest would be split between “dark matter” — stuff which does not radiate light, and “dark energy” — a placeholder name given to whatever it was that causes the observed acceleration in the expansion of the universe.

She covered, amongst other things, the possible link between quantum mechanics and the fluctuations it causes even in the vacuum of space, and the dark energy.  It’s all speculative at this stage, as she was clear to point out when reaching a dividing line in her talk between a first part covering scientific orthodoxy and a second with hypotheses and ideas for what the resolution of the 96%-we-don’t-understand problem.  Despite the fact that the talk was (very well) pitched at a general science-interested audience, and that I am a physicist, I certainly feel like I learnt something about cosmology from her talk.  That has to be the sign of a good talk.

The poor picture is because, as the host, I was standing at the front to introduce the speaker and only got to sat down as she started.  The turnout was so high (a little over 200 according to my count, which I did by counting only empty seats), that I had to sit right in the corner at the front to take the picture of one of her slides for this planned blogpost!

The next talk in the series, by the way, is on Wednesday 10th Feb 2016, by Dr Suzie Sheehy of the University of Oxford, who will give a talk entitled “10 Things you Should Never do with a Particle Accelerator“.  See you there!

Posted on
December 10, 2015
Posted by
Paul Stevenson
Posted in
Uncategorized