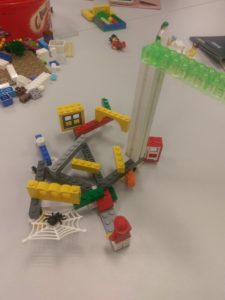 My visualisation of Brexit from my group therapy session

A new year, but the same old problems. Not only do we not know what Brexit will look like, we’re not even sure of the dimensions of what it could look like.

This is a real issue – both academically and politically – because any post-membership relationship will have to find positions for those involved on a number of matters of practical concerns.  Unfortunately, we don’t seem to know what all those issues are, let alone what they might be.

Overshadowing this is the rhetorical battle to define Brexit. As I’ve observed before, all political actors are currently trying to claim that definition, in pursuit of whatever political agenda they might wish to pursue. The only (partial) exception is Theresa May, who is trying to keep any definition vague, until such time as she finds a practical plan of action to follow.

So how do we get out of this? Three main thoughts occur at this stage.

Firstly, We should accept that everyone has an agenda in this. That might be for professional or personal reasons, or simply as a function of being a member of the polity. the whole point of democratic governance is that there is a competition of ideas and a protection of interests in a system that allows for controls on power and scope for changes in policy through agreed procedures.

In short, the system frustrates to protect. As the whole Ivan Rogers affair neatly exposes, it’s one thing to dislike an individual diplomat, but another to question the entire nature of diplomacy. You and I disagree on points of policy, we should agree on points of procedure on resolving those disagreements, certainly in the bigger scheme of things.

Secondly, as Richard North so delicately puts it, it might be helpful to recognise that no-one’s an expert on Brexit. Instead, people are experts in various other fields, that link to Brexit. Thus, no-one should have a monopoly of determining what happens in Brexit, or indeed what Brexit ‘means’. Any claim beyond saying that the referendum results means anything more than the UK has decided to leave the EU is a politically-contentious one.

Of course, even to get to that point requires a noticably minority of Remain voters to accept that they have lost their battle and that the result stands: that has broadly happened, but there is scant willingness to state that publically, which in turn casts long shadows over whatever work they now pursue. Thus the Supreme Court case – which returns to your frontpages in the coming weeks – is tainted by the suspicion that this is a front for non-notification of Article 50. Again, Ivan Rogers offers an alternative model: namely, that if you really don’t like what’s happening, then step away.

The final point is then a logical extension of the first two.

By talking with each other, we might start to find common ground on how to proceed. A quick glance around suggests some basic points of agreement:

Put like that, it seems rather anodyne, given that our preceptions of costs and benefits will differ radically. However, it still gives us something to work on, discussing and debating what these might be.

More importantly, it gives us the shared interest in the framework. We all want (and need) a structure to get us through this period and much of that is independent of whatever anciliary goals we might have.

So here’s my idea – a New Year’s resolution, if you like: let’s try and build that framework together.

During the coming weeks, I’m going to set up a website with wiki functionality and I’m going to start trying to write a text of an Article 50 agreement between the UK and the EU27: you get to join in too.

I’ll work on the basis that the UK is going to leave the EU and that this needs then clarification of a small number of basic points (see page 8 of the UKICE/PSA report that I contributed to back in November). Other that that, it’s open to debate what else goes into the text. I’ve suggested a plan for a transitional arrangement before, but we’ll see if that works in practice.

By writing something together, maybe we can help move debate on, even if only to point out the key problems.

Brexit 6 months on: the state of UK politics