Over Christmas my family went to Denmark. One of our stops was the relatively new Lego House in Billund. For those of you that don’t know, Billund is the home of the famous brick (see image below of some of the throwbacks) . We said this was a stop for the kids, but honestly, my husband and I geeked out hard on the over 25 million pieces of Lego there to play with!

In the basement of the building was the history collection and museum of the original Lego sets including the machine used to make the original bricks.

As a way to share all the fun and photos but also showcase how the Lego House truly embodies the concept of learning through play, I will breakdown the visit by zone. From their own webpage, you can read more about this, but basically the house has five zones which represent a holistic balance of five overlapping competences. The Red Zone, for creativity. The Blue Zone, cognitive abilities. The Yellow Zone, emotions and Green Zone is all about social play. The outdoor areas cater for physical play and spatial awareness. Being a cold, rainy day in December we didn’t venture to the outdoor zone.

So, the Red Zone. After leaving the Lego Square you ascend a ramp around the Lego Tree of Life (more on that later). You are met with a literally a waterfall of Lego (seriously, the scale was unbelievable!), and Lego everywhere! This creativity zone gives you free reign on almost any Lego piece you could need, in pools of mixed and colour coordinated pieces, to build whatever you like. There was also a section you could create your own mosaic using single pieces and base plates. The whole family got involved with this, the kids sticking losing to the rules of single piece only.

Also, worth noting, Lego house combined digital play along with the physical play of Lego. Using your wristband, you could scan loads of camera and info stations to do activities and take pictures of creations.

The Lego waterfall took my breath away! I also may have spent way too much time perfecting my Rudolf mosaic.

The Blue Zone, which aimed at cognitive ability, is where my kids probably spent the most time, had pools of Lego car building equipment in the Test Driver section, to test you cars on race tracks and ramps. My two year daughter ran the race track for quite a few rounds with her simple, yet effective design! The absolute best part of this, was the ability for the kids to test their designs, tweak them, and retest. Staff were so patient and helpful in finding just the right pieces. My favourite part of Blue Zone, was the Robo Lab. Where we got to code navigation steps for the robots to rescue the minifigures and free mammoths frozen in ice. City Architect is a simulator that lets you shape life in the city by adding your own constructions.

I really geeked out being able to show my kids coding in the Robo-lab! My 2 year old designed a car that saw her the victor in a few rounds of races. You can just about see her behind the track getting ready to launch her car in the far right!

Green Zone, designed for social play is where I spent waaaaay too much time constructing my mini-figure. Again pools of mini-figure accessories and fun camera settings meant hours spent coming up with our various family photos (our Christmas one is shown below). My 6 year old son had a blast making us all quirky and with skateboards. He also spent a good hour watching everything going on in the World Explorer section, exploring the three islands: The vibrant City, the bustling Town & Countryside and the exotic Tropical Paradise. Small cameras and screens are placed throughout the cities to give you close up views of everything going on. One thing we missed in the Green Zone (lunch and toilet break), was the Story Lab which allows you to write your script, cast the right LEGO mini-figure actors and choose your props.

These cities were amazing. With moving parts, hidden cameras and every detail thought of. We also made a mini-figure Christmas card including the kids eating their Christmas market pretzels and sausage. 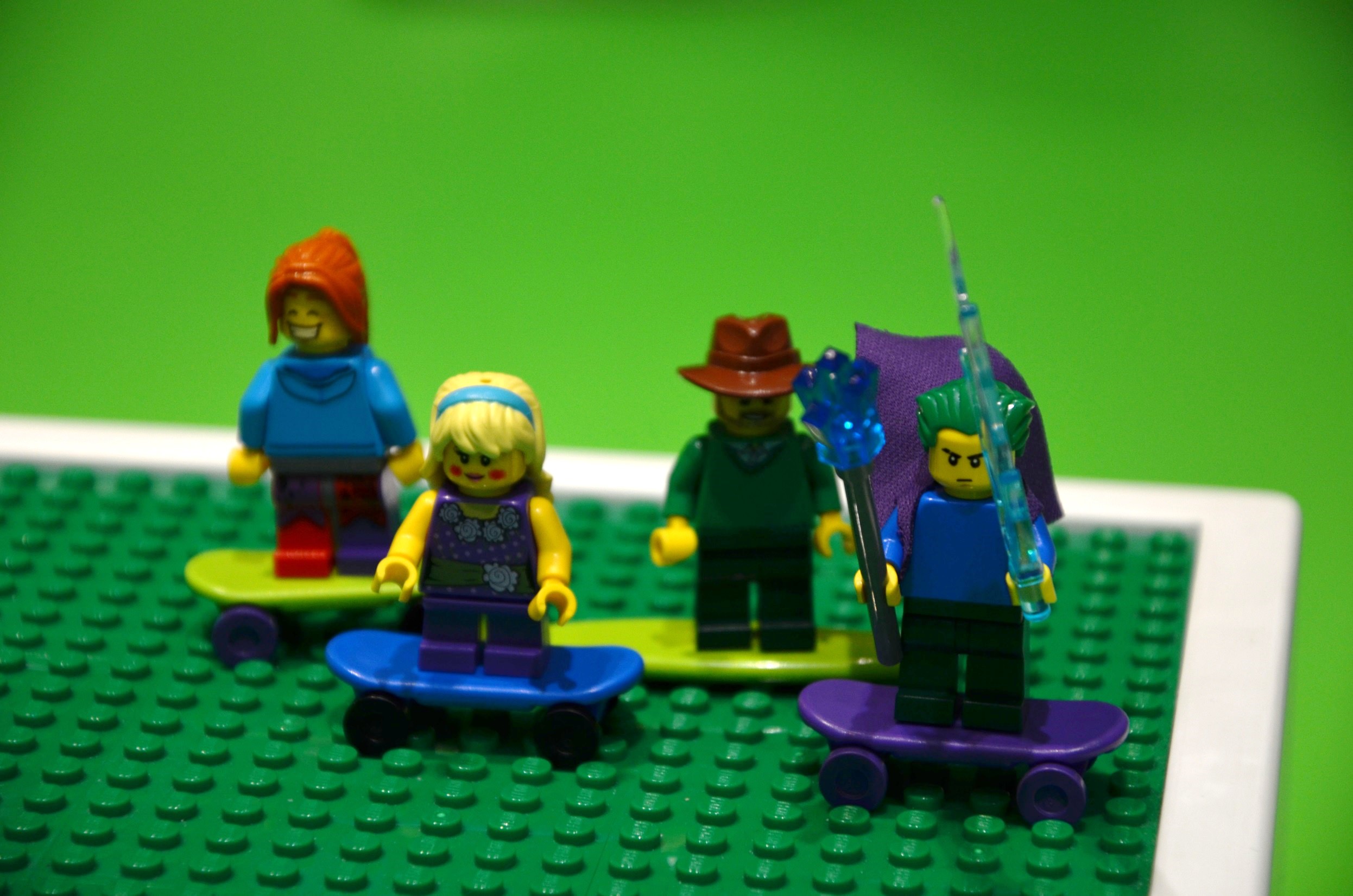 My son’s imagination was really peaked creating his version of our family. He is the one wielding the ice sword, sceptre and cape.

Yellow Zone, designed for emotional competence was another favourite amongst the little ones. They spent a good hour creating their fish models from lego, scanning them in and giving the digital image eyes, a mouth and character, and watching their animated fish join the digital aquarium. There was also bug making, flower making and “planting”, and a Duplo Pool my daughter dove right into.

The yellow room had some amazing concepts of communication and facilitating play learning with children. Also, this fish were so much fun!

As an educator, I was not only there for a bit fun but the gather inspiration and ideas and I came away inspired by all the thought and consideration that was put into the Lego House experience. The staff were some of the friendliest and patient people I have come across in a venue like this. I would be keen to know what kind of training they have had! They were all building amazing things, and handled the children so well.

As recommendation, I highly recommend the visit. Worth noting, there were hardly any people there when we went, so I am sure the experience was far more pleasant that had there been a crowd, but if you love Lego, it is a must-see! We got quite a lot of “freebies” including each of our very own, hot off the press (literally) bags of 6-piece sets with a unique combination assigned to our bracelets. The scale of it and attention to detail was staggering! Even the coffee and Christmas tree were to theme! (see below)

Pictures really can’t do this justice. Skies of Lego butterflies, life sized (almost) Lego dinosaurs (not sure you can see my very tall 6 year old standing in front of these beautiful Lego sculptures), the Lego Waterfall that fell into the bottomless pool of Lego pieces, and the Tree of life, whose branches held full sized Lego City kits! 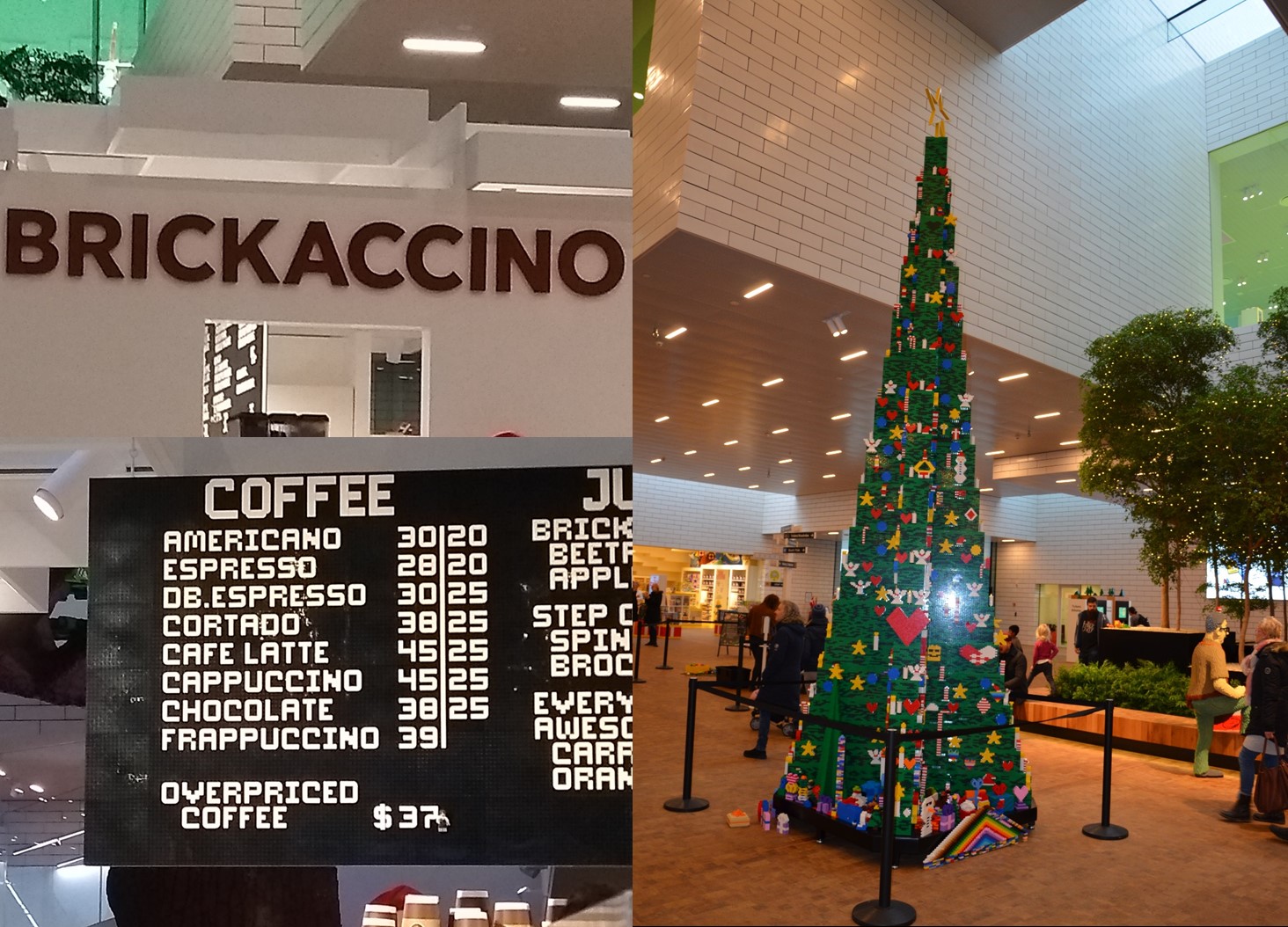 Even the coffee was to theme! Upon entering the kids got to build Lego presents and put them under the tree. Great Christmas experience!

If learning was made of Lego, what would it look like?

What are YOUR ‘rockets’? – Explorations of student resilience using Lego