A Symposium dedicated to Ethel Smyth (1858-1944), the Surrey-based composer and writer also noted for her suffrage activity in the early 1910s, was held in the Performing Arts Technology Studios at the University of Surrey on 19 February. This was the University’s first ever event for LGBT History Month, for which Smyth was named as one of the faces of the 2014 theme of Music.

Introduced by Professor Diane Watt, Head of the University’s School of English and Languages, the Symposium commenced with a talk by Dr Christopher Wiley entitled ‘Dame Ethel Smyth (1858-1944): In Search of a Lesbian Identity in Music and Literature’, in which he discussed possible ways of interpreting Smyth’s artistic output as reflecting her sexual identity and feminist sensibilities, with musical illustrations provided by Maureen Galea (piano) and the University Chamber Choir. 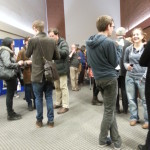 A drinks reception followed the talk, during which audience members were able to view the ‘Musical Passions’ exhibition celebrating the life of Ethel Smyth, provided courtesy of Surrey History Centre.

The Symposium closed with a concert of solo, chamber, and vocal works by Ethel Smyth, featuring staff and students of the University including pianists Maureen Galea and Margaret Roberts, Isabella Stocchetti (flute), and Christopher Wiley (oboe), as well as the University Chamber Choir. Highlights included a performance of Smyth’s Violin Sonata with guest artist Sophie Langdon and the Head of Performance, Professor Clive Williamson. The full programme was as follows: Pictured: Final-year undergraduate and conducting student Isabella Stochetti conducts members of the University Chamber Choir in a performance of ‘The March of the Women’.

The Symposium was held in association with the University of Surrey Equality and Diversity, the School of Arts, the School of English and Languages, LGBT History Month, and Surrey History Centre. Both the talk and the concert were attended by around 50 people, including staff and students of the University and external visitors.

The School of Arts holds Learning and Teaching Enhancement Day