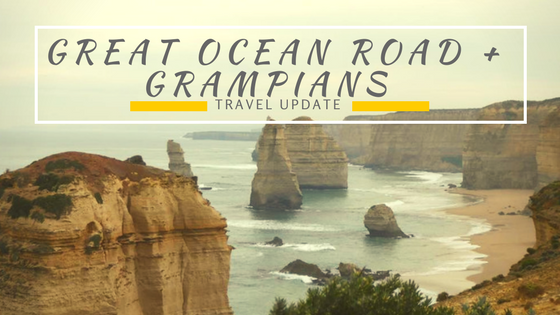 So last weekend I hit the road with some travel buddies in a rental car embarking on the must see, Great Ocean Road of Victoria which lies just out of Melbourne. We left mid-morning on Friday with some sunshine on our side.

The great ocean road is a 161 mile stretch of land starting off in Torquay and finishing just before Warrnambool. It was build as a commemoration to those who died in world war one by the soldiers who returned to Australia.

Its a great escape from the city life and suburbs of Melbourne (actually my first time in a more rural setting since I arrived). Along the road are various stops including little seaside towns and villages and some great natural views crafted by the coast through erosion.

We timed our trip perfectly as the road does get busy in the summer months, being one of the must do experiences in Victoria. At this time of year schools had just gone back to term the week before which also meant the roads were less busy. We were really fortunate to pick a weekend with some great weather which meant we got to enjoy the trip in the sunshine and witness some spectacular sunsets over the weekend. We also got to cross off three animals indigenous to Australia over the course of the weekend: Koala, Kangaroo and Emu.

Just for interest I thought I would summarise what we got up to on each day of the trip which might be useful knowledge if you’re planning to take a trip on the road.

The majority of the morning trip was spent getting out of Melbourne city. (There are alternative ways that wouldn’t require driving out from the city centre, such as going by public transport to somewhere like Geelong). We were lucky enough to have someone willing to drive out from the city, so we got to pack the car with some supplies and our weekend bags and set off.

After half an hour the city was way behind us and we were making progress down the highways toward the start of the road in Torquay. The seaside town is known for its great beaches for the keen surfers, and would make a great stop if this was on your to do list. However with three days we decided to continue. After passing the sign marking the entrance to the great ocean road we were off. We stopped off shortly in the town of Anglesea for a stretch of the legs and ended up having lunch overlooking a beautiful beach. (We brought lunch with us, one of the perks of renting a car is you can take a lot more snacks with you on the way.)

After lunch we set off again headed for Apollo bay. Along the way we stopped off at various lookouts you can find recommended in travel guides or the lonely planet guide. We also stopped off at Kennet River in search for some Koalas. Turns out spotting Koalas in the daytime is quite a skill especially because most of them are sat up the top of trees. But with perseverance we managed to find a couple balls of fur at the top of the trees.

After Kennet River we had a few more lookout stops before we reached Apollo Bay. Once we reached Apollo Bay instead of checking into our hostel we went onwards to Cape Otway Lighthouse. Unfortunately the lighthouse itself closes at 5 pm, however there were viewpoints from which you can see the lighthouse around the area in short walking distance. It was on one of our walks we were lucky enough to spot either a wallaby or kangaroo in some tall grass. We headed back to Apollo bay for the night staying in the YHA eco hostel. The great thing about traveling as a group is we were able to fill up one of the rooms in the hostel by ourselves. 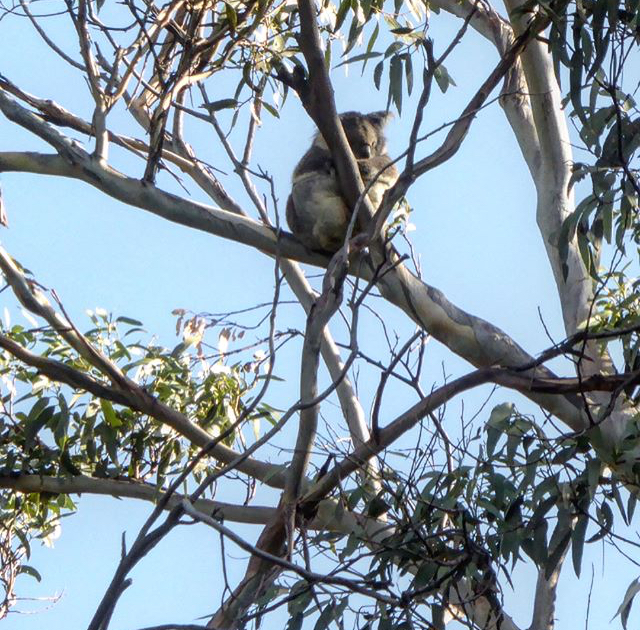 On Saturday morning we set off fairly early for part of the next leg of the trip. It’s this section where a lot of the natural landmarks are, like the 12 apostles and London Bridge. We stopped on a few lookouts again admiring the hilly landscapes on one side of the road and the coastal beaches on the other. We arrived at Port Phillip early morning to see the main attractions the twelve apostles as well as a spectacular beach just before the apostles themselves. The Twelve apostles might be slightly misleading because there is always question over how many are still standing tall and which ones have been lost to the sea through coastal erosion. They are still worth the visit though and this is where we probably saw the majority of people during our stay. We arrived as the sun hid behind the clouds, but this was only temporary and we were able to get some good views of the apostles.

We stopped for lunch in Port Campbell town and then carried on to some of the other sites including London bridge, Loch Ard Gorge and the Bay of islands (where we got our first little shower of the weekend). After Bay of islands we set off heading northerly up through rural Victoria towards Halls gap which is around a 3 – 4 hour trip. I remember thinking we could be in the middle of the US given the size of the farms and fields surrounding us. We made it to Halls Gap just before sunset checking into our hostel, YHA Halls Gap ecohostel. We were quick to get out for a walk after arriving as we spotted some kangaroos in the fields on the way in. We were very lucky to not walk long until finding some just beyond our hostel. We had dinner at the local hotel which was busy with other travellers from the surrounding campsites. We left the hotel following a glow in the dark line back to the hostel while admiring how many stars you could see in the sky. 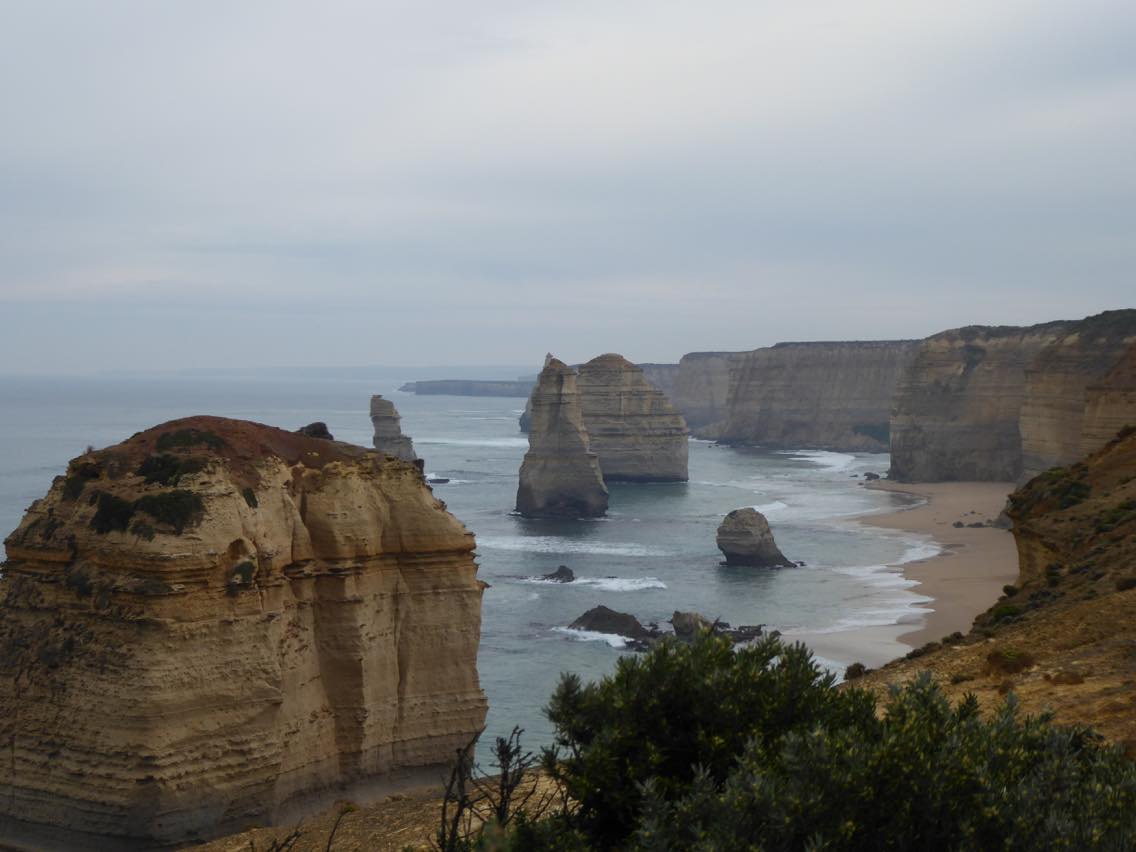 We didn’t make it out to see sunrise over halls gap, but we left fairly early in the morning after some breakfast. We knew the drive home would be a good 4 hours so we needed to get cracking on our time in the Grampians. First of all we headed towards the pinnacle walk which at the summit enables you to see over Halls Gap and the surrounding land beneath it. We took the canyon lookout on the path up which got us climbing over terrain in order to look back on our progress over a canyon. We continued up to the pinnacle lookout following the arrows along the way and taking some photos of the landscape ‘ all for the sake of Instagram’. We stopped here for morning tea in the form of vegemite (an australian must), rice crackers and juice. When we made it back down to the car park we drove for a short while further up into the mountains headed for McKenzie Falls. The great thing about doing the pinnacle climb first and then McKenzie falls was that McKenzie falls wasn’t far from the car park so we were able to get down and take in the view and the spray from the waterfall within about an hour tops. On our way back to the car park we finally got to see the illusive emu’s which were rumoured to be everywhere and yet we hadn’t seen one until the final day of the trip. We had some lunch back in the town of Halls Gap and headed back to Melbourne arriving just as the sun had set and concluding our tip. 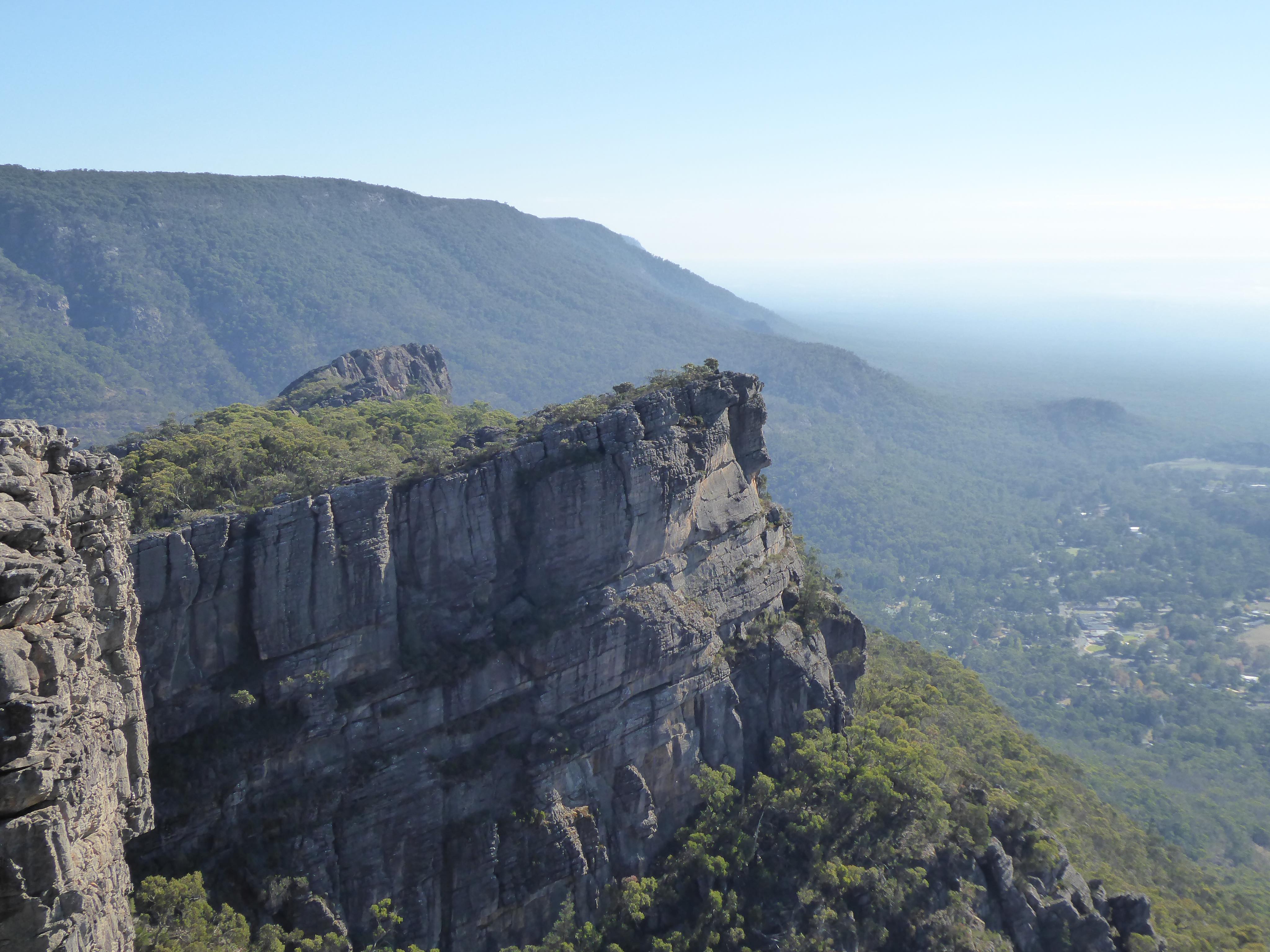 Tips for the Great Ocean Road:

+ While there are many different ways to do the Great ocean road, including touring. Car hire is a great way to give yourself freedom to explore wherever you want on the trip. It means you can stop anytime you need to take in the views.

+ Car hire is relatively cheap, but look out for things such as young persons surcharges. If you are fortunate enough to have older drivers this is a great way to avoid the surcharges.

+You can take out excess insurance from the rental company, but companies will also offer you cover online for certain conditions to lower the excess you would pay should you run in to any unforeseen circumstances (often these work out cheaper per day) but check because the rental company might be willing to match it like ours was.

+ Bring plenty of food, food is expensive to buy all the time, we brought enough supplies to last us breakfast and dinner so we only had to buy a meal out in the evening.

+Hostels have facilities for cooking if you are willing to cook for yourself to save even more money.

+ Get hold of travel guides or do some online research into the places you want to stop to get an idea of how long you want to spend on the road. We covered a lot in three days but you could easily extend your trip to an extra day if you wanted to spend more time in the Grampians or more time at the beginning of the trip.

+ Bring plenty of water with you – You might not get the chance to refill your water that much during the day so make sure you have enough on hand to keep you hydrated.

+If you’re hygiene conscious bring hand sanitiser, many public restrooms do not have soap. So you may want to have a sanitiser handy if your conscious about your hygiene (or you can just go with the flow).

+ Pick an off Peak time to visit: before the summer holidays (October / November) or after (March/April) are perfect times to travel if you want to avoid the peak of summer.

8 THINGS I’VE LEARNT FROM LIVING IN AUSTRALIA – ABOUT AUSTRALIA